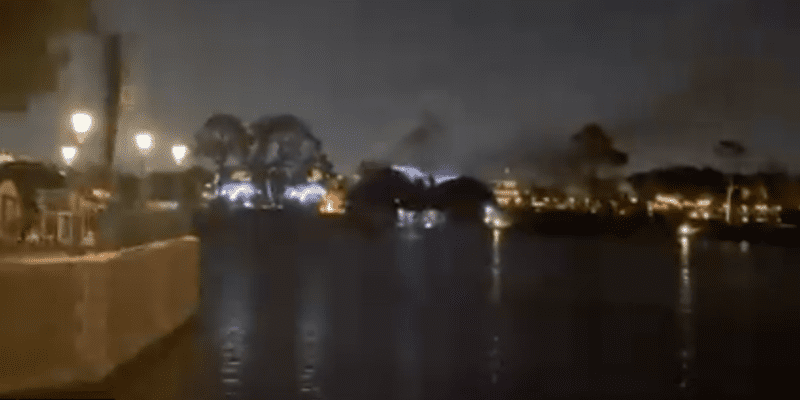 A massive fire has broken out in EPCOT at Walt Disney World Resort.

EPCOT is home to many thrilling and iconic attractions, including Frozen Ever After, Test Track, Soarin’ Around the World, Living with the Land, Journey Into Imagination with Figment, Remy’s Ratatouille Adventure, the all-new Guardians of the Galaxy: Cosmic Rewind, and much more.

One of the most popular offerings at the Disney Park is the nighttime spectacular EPCOT Harmonious.

Harmonious takes place on the barges in EPCOT nightly, but tonight the performance didn’t go as planned. Several Guests visiting the Disney Park reported a fire that began blazing on one of the barges and continued to grow.

@bh19861986 shared a video of the barges on fire in the early stages on Twitter.

Another user, @DaytripTravelrs shared a video of the barges on fire, as well, where you can see the blaze growing.

Oh no 😳#BREAKING : One of the Barges is on fire at EPCOT #WaltDisneyWorld #fire pic.twitter.com/n1XCI1aDy7

This isn’t the first time that a fire has broken out at the Walt Disney World Resort Park following the Harmonious. Back in September, flames were spotted at the World Showcase following a performance of Harmonious.

Harmonious is one of the largest nighttime spectaculars ever created for Disney Parks. The show is a beautifully crafted medley of classic Disney music and visuals reinterpreted by a culturally diverse group of 240 artists from all around the world. Come and be dazzled by all of it as you discover how Disney music and stories have the power to inspire and unite us all, overcoming any language or border.

This magnificent show brings to World Showcase Lagoon an innovative combination of floating giant screens, choreographed moving fountains, lights, pyrotechnics and lasers in a 360-degree view. Enter amazing worlds inspired by Moana, Aladdin, Coco, Brave, The Lion King, Mulan, The Princess and the Frogand other classic stories. Colorful images and effects dance and change as Harmonious weaves familiar Disney music and stories together. Through unique perspectives as diverse as the world itself, Disney songs hop from language to language as the show brings people from different parts of the world together to unlock the magic of possibility.

Inside the Magic will keep you updated as this breaking news story unfolds.