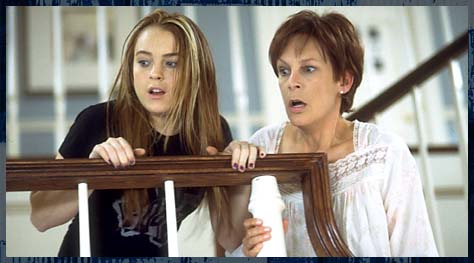 Freaky Friday first premiered in 1976, starring Barbara Harris and Jodie Foster and based on the book by Mary Rodgers. In 2003, Disney released a remake starring Jamie Lee Curtis and Lindsay Lohan. This film became the best-known telling of the beloved mother-daughter story, despite another Disney Channel Original remake in 2018 starring Heidi Blickenstaff and Cozi Zuehlsdorff.

Now, Curtis and Lohan say they’re ready for a Freaky Friday (2003) sequel. Curtis stars in Disney’s The Haunted Mansion, premiering in 2023, which she told The View has given her the chance to ask Disney to consider a second Freaky Friday film.

“Let me be the grandma! Let me be the old grandma who switches places,” said Curtis, who is currently on a press tour for Halloween Ends (2022).

“So then Lindsay gets to be the sexy grandma, who is still happy with Mark Harmon in all the ways you would be happy with Mark Harmon,” Curtis explained. “And simply, I would like to see Lindsay be the hot grandma, and I would like to see me try to deal with toddlers today. I wanna be a helicopter parent in today’s world, as an old lady.”
Lohan reportedly keeps up with Curtis via text message and has expressed interest in a Freaky Friday sequel. According to TMZ, Disney hasn’t approached the star with a film deal.

Mark Waters directed this 2003 remake of the 1976 film with a screenplay by Heather Hach, Mary Rodgers, and Leslie Dixon. From Disney:

Dr. Tess Coleman and her teenage daughter Anna have one thing in common – they don’t relate to each other on anything. Then one night a little mystic mayhem changes their lives and they wake up to the biggest freak-out ever. Tess and Anna are trapped inside each other’s body! But Tess’s wedding is Saturday and the two must find a way to switch back – fast! Literally forced to walk in each other’s shoes, will they gain respect and understanding for the other’s point of view?

Would you like to see a Freaky Friday sequel?