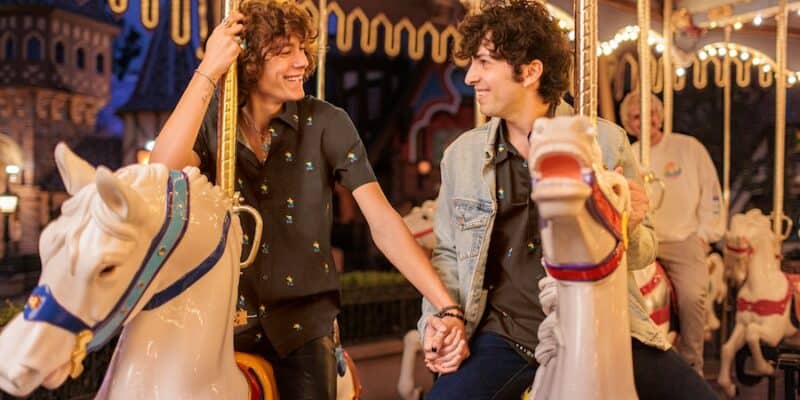 Walt Disney World and Disneyland Resort offer escapes from the real world, giving Guests of all ages the chance to experience the magic.

For most Guests, Disney Parks vacations are a break from the humdrum of jobs, errands, housework, and school. But for one Midwestern 14-year-old, a Walt Disney World Resort vacation gave him his life back.

Bill McKinley shared his story with The Daily Beast. At just 11, McKinley was enrolled in a Catholic military school, which he called
an all-out assault to discipline the “different” out of me and make me (gasp!) normal.”

“You couldn’t grow up gay in 1960s rural Indiana with alcoholic parents (and a suicidal mother) without developing certain survival skills: a precocious sensitivity for subtext, and a keen eye for subterfuge,” McKinley recalled. “I overheard the whispers and caught the knowing glances between my father and Sister Mary Patrick, the principal (most definitely not my p-a-l).”

One day, the nuns at McKinley’s school gave them the rare opportunity to watch TV. But it wasn’t just any television program – it was The Wonderful World of Disney, which advertised the opening of Walt Disney World Resort in 1971.

“Disney World? There was something beyond Disneyland?? How could I not have heard of this entirely new magical destination? I was so transfixed, I don’t think I even hazarded a breath,” McKinley wrote. “Mind. Blown.”

Though McKinley had never visited Disneyland, he instantly decided that he needed to see the newest Disney Park. And he needed to do it alone:

Maybe some queer angel looked down and knew this lonely, misunderstood gay boy needed a magical life-preserver to cling to during the oncoming storms of adolescence, bullying, and conversion therapy. All I know is I started acting like it was the most natural thing in the world for an 11-year-old boy to go around telling everyone he could about his upcoming solo trip to Disney World, reality be damned.

McKinley worked odd jobs and took leftover A-D attraction tickets from family friends returning from Walt Disney World vacations. (At this time, Disney Park entry was just $5.75, but Guests had to buy attraction ticket books. He only needed 90 cents for each E-ticket attraction.) He used a landline to call a much cheaper, off-property hotel, mailed traveler’s checks, and scoured newspaper archives at the library for Walt Disney World travel information.

After three years, McKinley hopped on a plane to Orlando on Monday, September 2, 1974 – all by himself. When asked how his parents allowed this trip, McKinley said he never asked:

They were both in the throes of their alcoholism. Home life was chaotic on the best of days. No one was clearly in charge. I’d made my plans perfectly clear for almost 3 years and worked like crazy to make them happen, and they never said I couldn’t go. As far as I was concerned, they couldn’t suddenly play their Parental Authority Cards.

Though the trip was decades ago, McKinley vividly recalls walking down Main Street, U.S.A. He stayed at Magic Kingdom from open to close and pretended to be a Guest to swim at Disney’s Polynesian Village Resort. And he met a Disney Cast Member who would change the course of his life:

Fairy Godmothers are real. My first day there, waiting in line for The Haunted Mansion, I met Jean, an 18-year-old off-duty ticket seller searching for her boyfriend Dave, who worked inside. We struck up a conversation and she ended up riding with me. We eventually found Dave and they took me down into the Utilidors (OMG!), under their wings, and home for dinner. I saw them every day. Not only have they been two of my closest friends ever since, each of their children (and grandchildren) knows by heart the story of “Mr. Bill” and how he ran away to Disney World and became part of their family.

Since that memorable trip, McKinley has visited the Disney Parks more times than he can count. He snuck into the Walt Disney Animation Studios in the 1980s and attended the grand re-opening of Disneyland’s new Tomorrowland in 1998 and the Grand Opening of the Disney/MGM Studios in 1989. McKinley even became a part of the Disney family, lending his singing talents to Pocahontas (1995) and Mulan (1998).

But without that Walt Disney World vacation, McKinley said, none of it would have been possible. “I celebrate that little boy’s grit and determination–so daring and unstoppable–and sometimes I also mourn the childhood he was so desperate to escape, and the parents who were so absent (or understanding?) that they let him go,” McKinley wrote.

“Without that suffering, I might never have longed deeply enough to summon that “spark,” take on that dream, and risk the journey that brought me the happy ending that saved my life,” he explained. “I never realized that in doing so, I’d become the hero of my own Disney movie.”

Has a Walt Disney World Resort vacation ever changed your life?