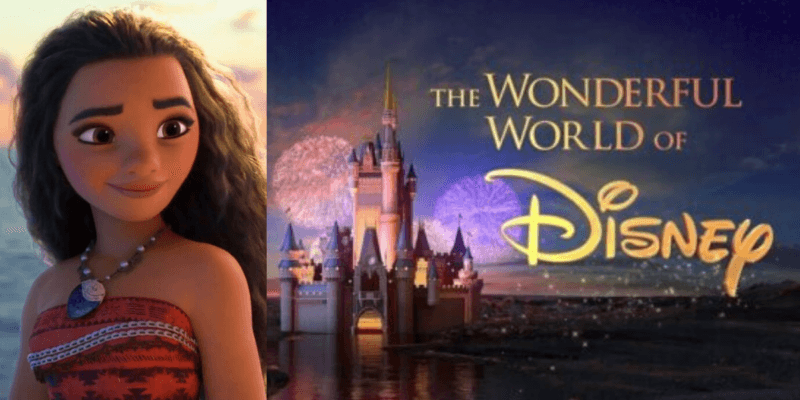 A classic Disney tradition —  “The Wonderful World of Disney” movie night special — is returning to its primetime spot on ABC.

Airing at 8 p.m. ET/7 p.m. CT for four straight weeks, “The Wonderful World of Disney” will return to people’s homes on Wednesday nights instead of its previous spot on Sundays. The weekly primetime family event will kick off on May 20, 2020, with Disney’s Moana.

Ready for movie nights with ABC? Grab your popcorn and join us for #TheWonderfulWorldOfDisney, starting May 20 with Moana! ?

After Moana, the movie schedule is as follows:

“The Wonderful World of Disney”

“The Wonderful World of Disney” was a show that ran on ABC from 1995-2005, It to some extent revitalized “Walt Disney’s Wonderful World of Color,” which ran during Disney’s Golden Age as a way for Walt to spread Disney magic beyond the movie theaters, but to also advertise his latest dream, Disneyland.

While it is no longer a consistent show, “The Wonderful World of Disney” has been reserved by ABC and used as the masthead for all Disney specials from Disney’s Magical Holiday Celebration and Disneyland 60 event to The Little Mermaid Live event. It will return again this month as simply the name of the Disney Movie Night Special.

But ABC is not the first major television network to incorporate more movies into their schedule due to the current lack of live, original content.

CBS already brought back its “Sunday Night at the Movies” segment, and ESPN even started showing Disney sports films on Friday nights. ABC’s decision also comes after the roaring success of its special, Disney Family Singalong and the announcement of a followup singalong special.

On a call with investors on Tuesday, May 5, 2020, CEO Bob Chapek mentioned the increased importance Disney movies and shows are playing in the company. He cited the now-54 Million subscribers signed on with Disney+, as well as the notable increase in viewership with special releases from Disney’s Secretariat to ESPN’s documentary series on the Chicago Bulls, The Last Dance.

Perhaps, as Disney continues to finalize the reopening procedures for theme parks and resorts, movie nights with “The Wonderful World of Disney” will become a more regular event.

Are you excited for the return of “The Wonderful World of Disney” movie nights? Which film are you most excited to watch with the family? Let us know in the comments!