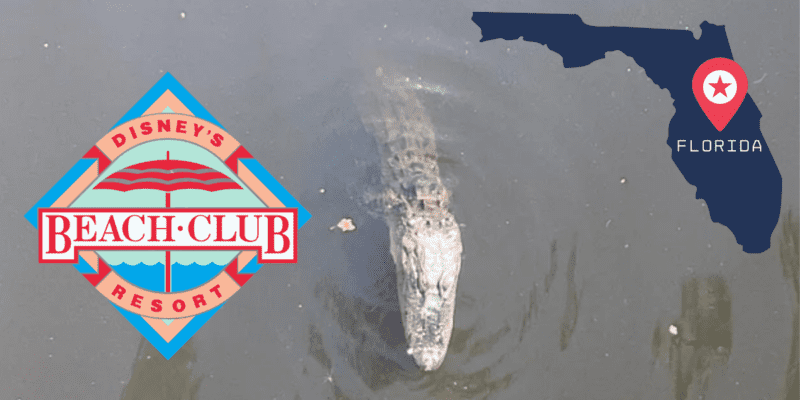 Walt Disney World Resort is The Most Magical Place on Earth… but it’s also in the heart of Central Florida’s swampland. Guests should expect to see wildlife besides Mickey and Minnie Mouse!

For the safety of Guests and wildlife alike, Walt Disney World Resort has a vigorous alligator relocation program. However, some wild critters slip through the cracks, like this one at Disney’s Beach Club Resort:

This bad boy was hanging out in the water just outside the quiet pool at Beach Club! from WaltDisneyWorld

Reddit user u/pianomanzano shared the photo, noting that the alligator was lounging under a bridge between a parking lot and Disney Vacation Club Villas.

Floridians know that where there is fresh water, there is likely to be an alligator. But some tourists fail to heed those warnings, leading to tragic incidents like the one in 2016 at Disney’s Grand Floridian Resort & Spa.

An alligator killed two-year-old Lane Graves after his parents ignored signs warning Guests not to swim in Seven Seas Lagoon. Graves was wading in the area when the Florida gator took him. His body was later recovered, and signs specifically warning Guests of nearby alligators were added to all freshwater areas on Disney property.

Following the tragedy, references to and jokes about alligators were removed from Disney Parks attractions, like Jungle Cruise at Magic Kingdom and Living with the Land at EPCOT. His family started the Lane Thomas Foundation, which supports children needing life-saving transplants. Walt Disney World also erected a lighthouse memorial for the little boy.

“There are no words to convey the profound sorrow we feel for the family and their unimaginable loss. We are devastated and heartbroken by this tragic accident and are doing what we can to help them during this difficult time.

On behalf of everyone at Disney, we offer them our deepest sympathy.”

If you spot an alligator at Walt Disney World Resort, do not approach it. Avoid entering freshwater in Florida.

Have you ever seen an alligator at the Disney Parks?