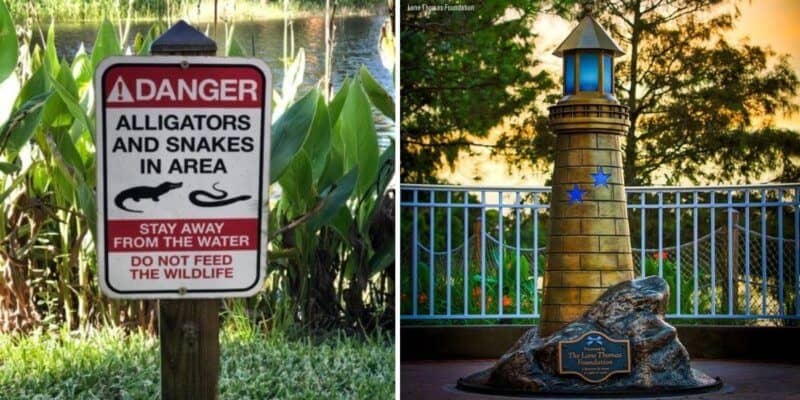 Disney continuously does its best to keep Guests as safe as possible, even when it comes to controlling the wildlife-based around their property.

Walt Disney World is built in Orlando, Florida, which means it is surrounding by marshes and large bodies of water, almost all of which contain alligators. The state is so full of gators, that they even have a theme park for the reptile called Gatorland, where Guests can visit thousands of gators. Considering the state has about 1.25 million alligators, anyone visiting Florida should always be on the lookout when around water.

If you have been to Disney World, you know that there are lots of bodies of water, all of which will have alligator warnings on them. If the body of water is easily accessible, it is likely roped off, so Guests keep out.

Disney always had signage noting that there may be alligators in the water at every body of water, and to stay away, but ever since the tragic gator attack on young Lane Thomas Graves at Disney’s Grand Floridian Resort, the company has done even more to warn Guests and ensure they are aware of the natural dangers the water has. There is also a sculpture of a lighthouse at the Grand Floridian for the Lane Thomas Foundation, which was created after the boy’s unfortunate passing.

Since then, according to ClickOrlando, state-contracted wildlife trappers have removed an average of 23 alligators from Disney World each year, totaling over 200 since 2016, the year of the attack. 2016 actually posed as the biggest year for alligator removal on the property for quite some time, with 83 of the reptiles being removed.

Disney World has actually been granted permission to contact trappers directly to remove nuisance alligators by the FWC, so they can continue to try and keep Disney as safe as possible. A Walt Disney World spokesperson discussed their relationship with the Florida Fish and Wildlife Conservation Commission stating:

“In keeping with our strong commitment to safety, we continue to reinforce procedures related to reporting sightings and interactions with wildlife, and work closely with Florida Fish and Wildlife Conservation Commission to remove or relocate certain wildlife from our property in accordance with state regulations.”

From this, we can see that Disney is continuing to ensure that they keep their property safe, which ensuring they do so in a way that is safe and responsible to the wildlife around them. It is only alligators over the length of 4 ft that are removed, as those are deemed to be a threat to people.

So, please be aware that when you are walking along the quaint beach of Disney’s Polynesian Resort and you see rocks and rope blocking off the water, or perhaps roaming around the marches of Old Key West and notice alligator signage is close by, ensure that you are keeping both you and your party away from the water areas to stay as safe as possible.

Have you ever seen an alligator on Disney World property?