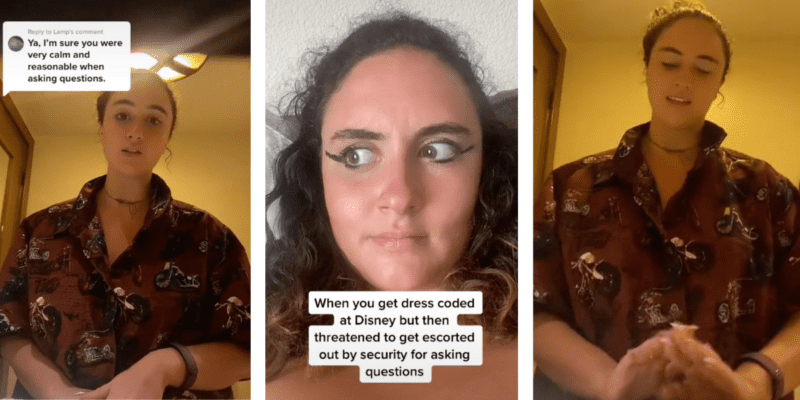 Independent of this TikTok trend, many Guests have called out the inconsistency in Disney’s dress code. But after being stopped at security, a former Disney Cast Member decided to question the decision in person. @ocinnedi posted on TikTok:

“When you get dress coded at Disney but then threatened to get escorted out by security for asking questions,” she captioned the video. In a comment, she further explained what happened:

The rules are very vague. I wore the same shirt I wore at the same Park three days earlier and then explained that and then also explained what was the difference between what me and others girls who had just walked through were wearing . It was either HR or head or security that said “If I asked anymore questions or say anything else I will be escorted out of Hollywood studios” … Honestly… kinda felt like a police interaction. I was like this is messed. I also didn’t like seeing the only people being questioned were mixed…

“The dress code is very, very, very inconsistent and something that 90% of us don’t even know how to deal with,” she explained. “All I asked was, ‘Why am I being stopped?’ when I was wearing the exact same outfit that I was wearing three days before in the same Park.”

“My dad asked the same question, very politely being like, ‘Is there a problem here? What is the problem?’” the Guest said. “We couldn’t even finish half of our sentence before being threatened to be took out. I started crying at that point.”

Walt Disney World Resort keeps its definition of “inappropriate” vague, so it’s up to the discretion of the Cast Members at Park entry to decide if clothing adheres to dress code requirements. From Disney: