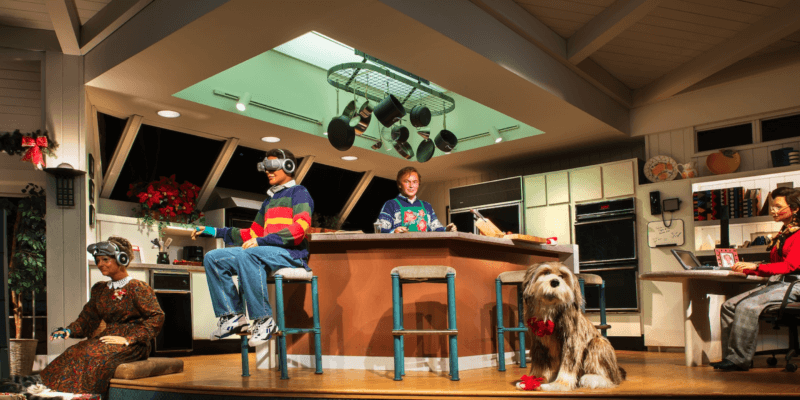 Few experiences at Disney World can outmatch the legacy and importance of Walt Disney’s Carousel of Progress.

Located in Tomorrowland at the Magic Kingdom, Walt Disney’s Carousel of Progress is as entertaining as it is air-conditioned. Taking Guests on a tour through the progress of electricity, travel, cooking, cleaning, and general American life, this attraction will be sure to please those looking for a fun time as well as something that is educational.

However, there is one aspect of this attraction that some Guests tend to loathe.

Each scene of the attraction takes Guests through different decades of American history, specifically in the average household. However, the final scene takes place in the future. Several issues arise from this choice, primarily with how it depicts what “the future” will actually look like.

Sure, back when it first opened, the thought of a voice-activated oven or virtual reality gaming system blew our minds, but today, these inventions are second-nature to most. That means that the final scene of the attraction can be off-putting to some and come off as incredibly dated. Tomorrowland, in general, faces this problem, as the “ideas of tomorrow” always arrive at some point or another.

However, one change got fans talking quite a bit, and it had nothing to do with the future.

Back in the Summer of 2022, this ride underwent a change, with Disney updating this final scene. The update brought life back to the house, as the television sometimes wouldn’t work. This was fixed, along with some other smaller issues. However, one of the changes was to John’s hair.

This change was discussed on social media, with dozens of fans commenting on their thoughts. You can see the full post below:

They dyed his hair black ?!

They dyed his hair black ?! from WaltDisneyWorld

As you can see, John’s hair is now jet black when it used to have grey throughout. This change is certainly a minor one, but that won’t stop hardcore Disney fans from noticing. In the comments, one user simply said:

“Of all the updates needed, this was not one of them.”

Another user theorized why exactly Disney made this change:

“I wonder if there was a strange reason behind it, like the fake oven smoke was discoloring the other hair in weird ways.”

One user made a sponsorship joke:

“They’re trying to get a “touch of gray” sponsorship as he fades back to his original color.”

For those who may not have had the chance to experience it, Disney describes The Carousel of Progress as follows:

What are your thoughts on this change?