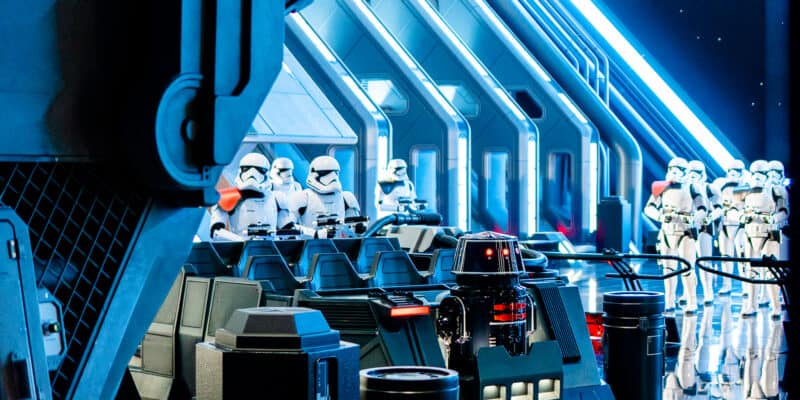 When visiting any theme park it’s important to remember one thing: breakdowns happen. Rides are complicated, especially the newer, high-tech ones at Universal Studios and Disney. We have already seen Disney’s new coaster, Guardians of the Galaxy: Cosmic Rewind, face multiple issues since opening.

Both rides in Disney’s Star Wars: Galaxy’s Edge goes down during the day quite frequently, but one is far more infamous.

Related: Disneyland’s Indiana Jones Ride May be Returning Sooner Than You Think

Star Wars: Rise of the Resistance, located in Star Wars: Galaxy’s Edge, is perhaps Disney’s most ambitious and high-tech attraction yet, featuring multiple ride systems and amazing animatronics, at least when things go to plan

However, a different portion of this ride broke down recently, resulting in a lackluster pre-show.
For those that don’t know, the ride experience starts when Guests enter the actual queue. During a certain part of this queue, Guests will encounter BB-8 as well as a holographic Rey.
However, these two effects were not working for Guests recently. This issue was shown in a tweet which is linked down below:

B-mode for the briefing room. No BB-8 animatronic or even the Rey hologram?! #WaltDisneyWorld

B-mode for the briefing room. No BB-8 animatronic or even the Rey hologram?! #WaltDisneyWorld pic.twitter.com/hLW4ubPNfR

As you can see, Rey and BB-8 are both missing. We aren’t sure what the reason is why these effects were missing. At Walt Disney World, a major part of the overall ride experience can be found in the queue, so this is certainly disappointing.