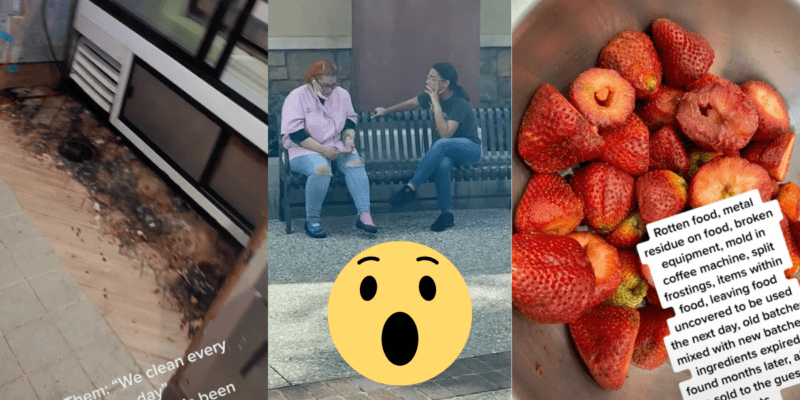 Though we typically associate bakeries with nothing but joy and sweetness, one TikTok account aims to expose one of these many bakeries for mistreating its employees and serving inedible food. @exposingjobs posted its first video on Monday, with subsequent videos only getting more concerning:

The first few videos showed rock-hard cupcakes and eclairs, so stale that they could be banged against the countertops. Later, the account posted a video of coconut milk that was left out to rot so long it turned into “cheese.” Employees claimed they were still told to use it in baked goods:

The account owner claimed to have quit her job due to disability discrimination. A coworker’s boyfriend recorded a manager telling her she was “too autistic” to work anywhere but her home. There is no audio to prove what was said between the two, but the video is available here:

Later, the account shared a montage of dozens of photos of rotten fruit, equipment contamination, mold, and expired ingredients used in goods that were subsequently sold to Walt Disney World Resort Guests:

Additionally, the former employee accuses the bakery of allowing allergens into “allergen-friendly” and “gluten-free” items. She claims many products, like the coconut milk, were left unrefrigerated for days, and disposable, dirty frosting bags were used again and again:

Most recently, the account shared a video of accumulated filth on the floor of the bakery, which allegedly claims to clean every day:

Though the account owner refuses to name the bakery she allegedly worked at, it’s identifiable as Erin McKenna’s Bakery NYC based on the countertops, menu items, pink employee uniforms, and a photo of the interior of the store: On the left is a screenshot from an @exposingjobs video. On the right is a Google Maps photo of Erin McKenna’s Bakery NYC at Disney Springs. Note the matching polka dot wall, cursive sign, and countertops.

It’s crucial to note that all claims in this story cannot be fully verified. Neither Erin McKenna’s Bakery NYC nor Walt Disney World Resort have responded to these allegations.

Erin McKenna’s Bakery also has New York City and Los Angeles locations. It’s well known for its gluten-free and vegan options, making allegations of cross-contamination all the more concerning for Guests with dietary restrictions and allergies. From Disney:

Originally known as BabyCakes when it first opened in Manhattan’s Lower East Side circa 2005, Erin McKenna’s Bakery has developed quite the cult following over the years. It’s grown from a purveyor of vegan cupcakes to the master of allergy-friendly baked goods. From brownies to cookies to cinnamon rolls, every single item is kosher and refined sugar-, gluten-, wheat-, soy-, dairy- and egg-free.

Have you noticed any issues at Erin McKenna’s Bakery or any Disney Springs bakery?