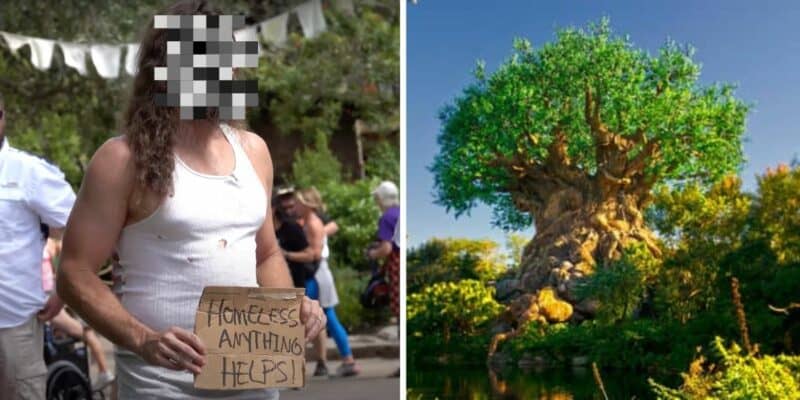 While Walt Disney World may be known as “The Most Magical Place on Earth,” this doesn’t mean you can always know what to expect when visiting.

From fistfights in Fantasyland to fires breaking out during a nightly firework show, no two days at Walt Disney World will look the same, as is the case with a new YouTube video.

The Magic Kingdom, EPCOT, Hollywood Studios, and Animal Kingdom have all become hot spots for various types of social media posts. Whether it’s TikTok, Instagram, Twitter, or Facebook, you can guarantee someone will be posting something everywhere you look.

However, it’s not every day that someone dresses up for a video inside the actual Parks, but this is exactly what a Guest did recently.

A video has gone viral online showing what appeared to be a homeless man begging in Walt Disney World. The video was published on YouTube on October 24 and quickly spread across various other social media platforms like Reddit, TikTok, and Instagram.

Throughout the video, a Guest with long hair can be seen standing right in front t of Expedition Everest at Animal Kingdom with a small cardboard sign that reads: “Homeless. Anything Helps.” The Guest is wearing a tank top with holes ripped into it as well as tattered jeans. It’s also interesting t note that the Guest is not wearing shoes.

During the video, dozens of Guests’ sections are caught, with some laughing and some being incredibly confused.

The Guest pulls a variety of pranks on Guests as they walk by, one of them being him “falling asleep” on the ground. Later on, the “homeless man” gets his picture taken with Donald Duck in DinoLand U.S.A. Eventually, the “homeless man” is approached by Disney management, where the group is questioned. The group is also questioned by Disney security, but no issues arise, and they are let loose. The full video can be seen here, shared by the channel Vlog Creations.

To most people, a trip to Disney is the perfect vacation for the whole family, featuring incredible rides, delicious food, and an all-around incredible atmosphere. But when visiting any of the Disney Parks or Resorts, it is crucial to understand the rules and abide by them.

When visiting the Parka, Guests can check all of the rules and regulations on the official website of the Resort. It’s always important to follow the rules Walt Disney World puts in place for all Guests, not only to ensure you remain safe but other Guests and Cast Members are safe as well. Click here for an overview of Walt Disney world’s rules.

What do you think of this “prank”? Do you think Guests should be able to do something like this while inside a Disney Park?