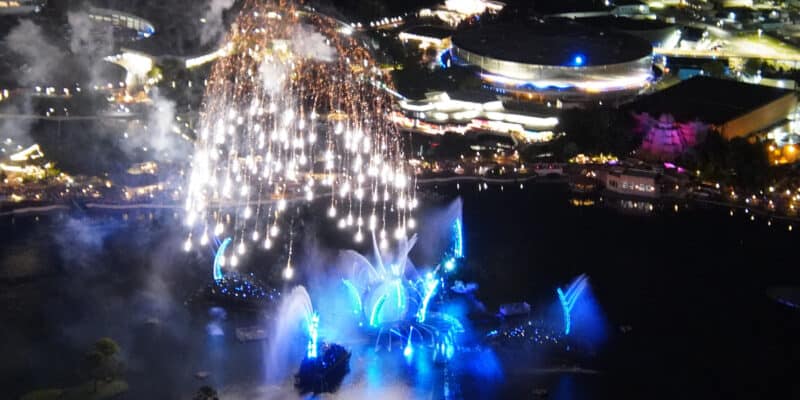 Walt Disney World Resort has issued a statement following reports of a fire during a beloved nighttime spectacular.

Harmonious takes place on the barges in EPCOT nightly, but tonight the performance didn’t go as planned. Several Guests visiting the Disney Park reported a fire that began blazing on one of the barges and continued to grow.

Inside the Magic reported about the fire that broke out, but now Disney has issued a statement on the incident.

Reporter Scott Gustin shared Walt Disney World Resort’s statement, in which they shared that the fire “only impacted a fireworks launch platform.”

“A fireworks launch platform had a contained fire after Friday’s show and was extinguished.”

“A fireworks launch platform had a contained fire after Friday’s show and was extinguished.” pic.twitter.com/MnFRPGeLVn

According to the statement, only a fireworks launch platform was affected by the fire, which was contained and later extinguished. At this time, no injuries are being reported and, fortunately, Disney Cast Members are expertly-trained to handle situations as they arise to ensure that Guests are safe and that incidents like this are controlled.

The extent of the damage is unknown at this time, but the good news is that the fire was contained and that only this small piece of EPCOT was affected.

This isn’t the first time that a fire has broken out at the Walt Disney World Resort Park following the Harmonious. Back in September, flames were spotted at the World Showcase following a performance of Harmonious.

EPCOT is home to many thrilling and iconic attractions, including Frozen Ever After, Test Track, Soarin’ Around the World, Living with the Land, Journey Into Imagination with Figment, Remy’s Ratatouille Adventure, the all-new Guardians of the Galaxy: Cosmic Rewind, and much more.

Harmonious, which is a beautiful way to finish your EPCOT experience, is one of the largest nighttime spectaculars ever created for Disney Parks. The show is a beautifully crafted medley of classic Disney music and visuals reinterpreted by a culturally diverse group of 240 artists from all around the world. Come and be dazzled by all of it as you discover how Disney music and stories have the power to inspire and unite us all, overcoming any language or border.

This magnificent show brings to World Showcase Lagoon an innovative combination of floating giant screens, choreographed moving fountains, lights, pyrotechnics and lasers in a 360-degree view. Enter amazing worlds inspired by Moana, Aladdin, Coco, Brave, The Lion King, Mulan, The Princess and the Frogand other classic stories. Colorful images and effects dance and change as Harmonious weaves familiar Disney music and stories together. Through unique perspectives as diverse as the world itself, Disney songs hop from language to language as the show brings people from different parts of the world together to unlock the magic of possibility.

Have you experienced anything like this when visiting Walt Disney World Resort? Let us know in the comments!