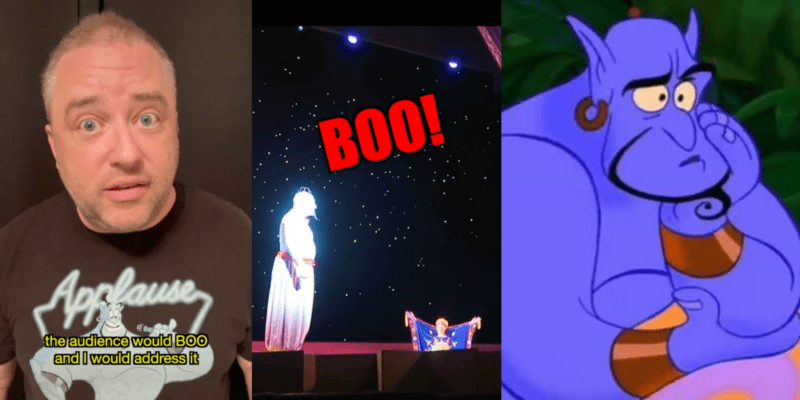 Disney’s Aladdin: A Musical Spectacular graced the stage of the Hyperion Theater in Hollywood Land at Disney California Adventure from 2003 to 2016. This Broadway-style production told a shortened version of Disney’s renaissance classic, Aladdin (1992), and was a Disneyland Resort fan favorite.

Though the show has been defunct for six years, replaced with Frozen – Live at the Hyperion, one former Disney Cast Member is sharing stories about his time in the musical on TikTok. Dylan White (@itsdylanwhite) played Genie for ten years but says one repeated joke nearly got him fired:

GENIE STORY TIME! I was the Genie for 10 years. These are some stories. #aladdinshow #aladdin #genie #disney #disneyland

After Jasmine and Aladdin sing “A Whole New World,” Aladdin tells Genie that he finally made the Disney Princess fall in love with him. Aladdin previously promised to free Genie with his final wish but has grown selfish and refuses to free his friend.

“Sometimes, the audience would Boo, and I would address it,” White explained. “And I had a director who hated when I did that.”

White shared a clip from the show. The audience boos after Aladdin says, “I’m sorry, Genie. But I might still need that final wish!”

“You hear that?” White ad-libs. “Those are my thoughts!” The audience roars with laughter.

“She hated it because she said, ‘That’s not the right place for a joke.’ And to be fair, it kind of wasn’t,” White said of the recurring bit. “But at the same time, A. it’s funny, and B. it allowed me the opportunity to regain control of the audience and the show so we could continue. But she didn’t understand that, and in her words, she ‘didn’t understand comedy.’”

“Wow! if she didn’t understand it why didn’t she leave it to the professional, you. The crowd interaction was one of the main reasons I loved the show”

“That was my argument,” White responded. “It almost got me fired.”

Though this popular musical is no more, Disney fans can get their Aladdin fix with the Tony Award winning Aladdin the Broadway Musical, live in New York City, on the West End in London, and touring around the United States.

Did you ever see Disney’s Aladdin: A Musical Spectacular at Disneyland Resort?