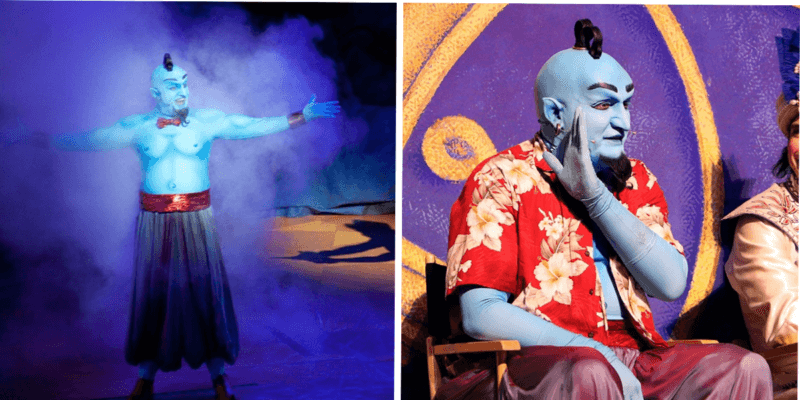 The Disneyland Resort’s Disney California Adventure Park has undergone many changes over the years. Disney fans have been loving Pixar Pier and are very excited for the upcoming Avengers Campus.

But if there’s one thing that most Disney fans can agree on, it’s the longing for Disney’s Aladdin –– A Musical Spectacular to return. Well, although the possibility of this show returning to the Hyperion Theater is unlikely, fans can now relive some of these moments thanks to a familiar face.

Disney’s Aladdin –– A Musical Spectacular debuted at DCA’s Hyperion Theater in January 2003 and later closed in January 2016. During its over a decade of a run, this show created quite a large fan base. So much so, that it was not easy for fans to say goodbye to the spectacular.

Later, this show was replaced with a Frozen production, and reactions were mixed. Now, in the midst of the pandemic and with Avengers Campus grand opening on the horizon, it looks like a dining area known as Shawarma Palace will occupy this location, at least for the time being to provide more designated dining areas for Guests.

Related: Fans Share What They Think Should Replace ‘Frozen Live’ at DCA!

Recently, actor Dylan White took to TikTok to relive his journey with the show as well. And if the name Dylan White doesn’t ring a bell and if his face doesn’t look recognizable, not to worry. We’re used to seeing him a little more blue!

White shares in his debut TikTok video that he played the role of the Genie for 10 years. And fans of his and the musical, have had nothing but welcoming and positive messages for White.

We can’t wait to see what other moments Dylan White might share of his experiences in Disney’s Aladdin –– A Musical Spectacular!

Do you remember Dylan White as the Aladdin musical Genie at the Hyperion? Let us know in the comments!

Planning a visit to Disneyland Resort’s DCA? Let Academy Travel help you with all of your vacation planning needs!