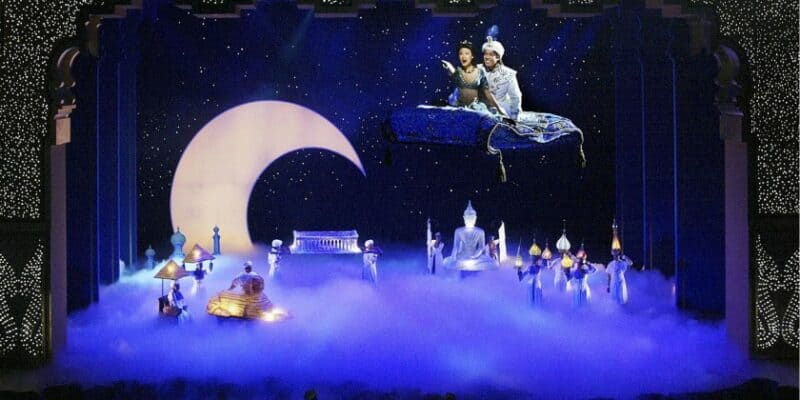 For over a decade, Aladdin: A Musical Spectacular drew fans into Disney’s Hyperion Theater at Disney California Adventure Park. Fans loved seeing the characters come to life on stage — including the Genie of the lamp, who would always make them laugh with hilarious, and timely, jokes. There was even a magic carpet that flew above the audience as Aladdin and Jasmine sang ‘A Whole New World’.

It was during this love song that something truly memorable — and scary — happened that Guests won’t soon forget. Aladdin and Jasmine were flying over the audience when, suddenly, the magic carpet flipped over and the two actors were stranded upside down in midair.

The Cast Member, named, Dylan, who played the Genie at this time recently posted that he is frequently asked if he was in that show. He confirms that he was a part of that performance and talks about the event on TikTok (@itsdylandwhite). Dylan gives details about how the Cast handled the mishap, as well as what Disney did to make sure that it didn’t happen again.

Take a look at the video below.

According to Dylan, Disney wanted to make sure that its Cast Members weren’t put in that kind of danger again. Disney took the flying magic carpet element out of the Aladdin show for a year and a half and completely reconfigured the design and then created a whole new rig to hold the actors and make sure that the carpet would never be able to flip upside down again.

A video of the scary moment was also posted on YouTube by Tony Tran.

Unfortunately, to the dismay of many fans, Disney announced that it would be ending Aladdin: A Musical Spectacular and the show took its final bow in January 2016. The show was replaced by Frozen – Live at the Hyperion, which premiered in May 2016.

Frozen – Live at the Hyperion is not currently showing at Disney California Adventure Park. The show ended when Disneyland Resort was forced to shut down due to the pandemic, and has not started up again since the theme parks reopened in April. Disney has not announced if and when the show will return to the Park.

What do you think about this crazy accident and the way Disney handled it? Let us know in the comments!