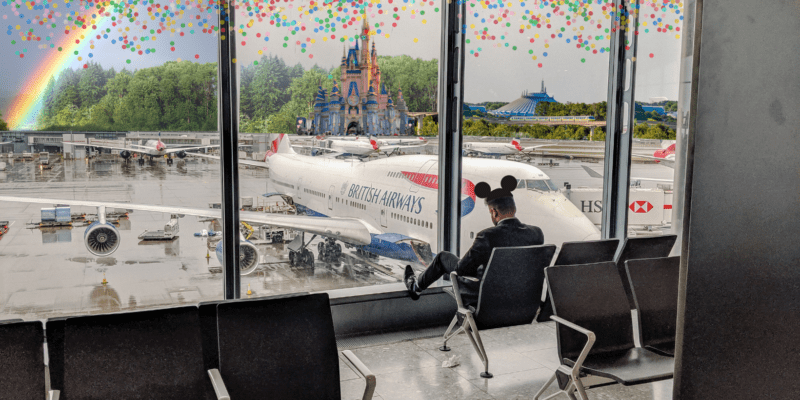 The Walt Disney Company made some big announcements at the 2022 D23 Expo in early September, but company executives made no mention of a Walter Elias Disney International Airport to be built on Disney World property, and time is running out for Disney to seal the deal.

RELATED: Disney’s Plans for a Massive Magic Kingdom Expansion are More About a Strike Against Universal than a Stride Toward a Better Guest Experience

Construction of the Walter Elias Disney Airport at Disney World, which would serve Guests flying to the Resort area to visit the parks, must be completed by June 30, 2023, as new legislation takes effect on July 1, 2023–legislation that will take away Disney’s autonomy in building its very own airport forever. But the project would be a huge undertaking. They’re going to need dump trucks full of pixie dust for this one.

Disney World is ever-changing and ever-growing, just like Walt Disney “prophesied” it would do when he first bought thousands of acres of swampland in a desolate, humid area of Central Florida in the early 1960s.

“Here in Florida, we have something special we never enjoyed at Disneyland: the blessing of size,” Walt said. “There’s enough land here to hold all the ideas and plans we can possibly imagine.”

Walt’s first purchase of land in Central Florida was transacted in October 1964. And by the time he was finished purchasing swampland, he had amassed almost 30,000 acres within Orange County and Osceola County. And it only cost him about $5 million.

In 1966, Walt Disney and his team began their lobbying efforts in the Sunshine State with the goal of establishing the Reedy Creek Improvement District. Reedy Creek would serve as a special tax district that ultimately gave Disney World the blessing of full autonomy over the land on which the new theme park resort would be built. In essence, Disney could do (almost) whatever it wanted.

The Reedy Creek independent special district was created to function as its own authority from a government standpoint, allowing it to have the same authority and responsibilities as any county government. Reedy Creek could levy taxes, create its own building codes, maintain itself independently from the surrounding counties, and it could even build its own nuclear plant–or an airport that would serve visitors who vacationed at Disney World.

The Florida legislature passed the Reedy Creek Improvement Act in 1967.

When Walt Disney bought up swampland in Florida, he had already been dreaming of his airport of the future. It would serve many purposes, not the least of which was offering transportation for Guests to and from Walt Disney World.

See the location of the airport at the southern tip of the Disney World development area on this map.

Walt envisioned an airport that a central monorail line would connect to an entrance plaza and a hub and to the theme park resort area, which would become Disney World. The airport would be situated around and near Bay Lake.

During the time that Walt Disney World was being built, that part of Central Florida wasn’t quite the size it is now, but it was still in need of a new airport, as the closest one to the Walt Disney World area had only one commercial airstrip, and it operated out of part of McCoy Air Force Base (hence the call letters “MCO”), according to a site that features posts about the history of Walt’s “Florida Project” and E.P.C.O.T. City:

“The desire for Walt Disney World to have its own airport wasn’t as arbitrary as it might seem today. In 1971, what has now become the bustling Orlando International Airport was known as the Orlando Jetport at McCoy. The Jetport inherited an old missile hangar from the Air Force. Even after the government decommissioned the base in 1975 and transferred the entire site to the city of Orlando, air travelers arriving at the newly-named Orlando International Airport were greeted by the same primitive Quonset hut terminal until more modern facilities opened in 1981.

“For a brief time in the early 1970s, though, it was possible for the jet-set to wing their way to the Vacation Kingdom of the World courtesy of Disney’s very own landing strip, the Lake Buena Vista STOLport. This facility, a private-use airport, designated “DWS” by the IATA, was essentially a featureless 2000-foot landing strip and taxiway.”

The Lake Buena Vista STOLport was situated to the east of the now-removed Walt Disney World Speedway and only offered services to Guests coming to vacation at Disney World. According to Disney Fandom, Shawnee Airlines serviced passengers headed to Orlando International and to Tampa International. It was a tiny place, but there were plans to build a full-service airport located at the Walt Disney World Resort. Those plans fell by the wayside in the 1980s, however, as Disney expanded its Monorail system.

Currently, millions of Guests arrive at Orlando International Airport en route to Disney World, but the Resort is located 20 to 25 miles from MCO, meaning Guests either have had to arrange for transportation from Orlando to Disney World since the STOLport died. Because of this, Disney implemented a service known as the Magical Express.

It was free to Guests staying on property at Disney World and offered transportation to and from MCO via brightly colored, Mickey-inspired buses. But lots of good things have to come to an end, and Disney’s Magical Express met its demise in January 2022 (probably because it was free). The end of the Magical Express left Guests to arrange other means by which to get to the parks from MCO: Mears Connect, the Sunshine Flyer, car rentals, and rideshares like Uber and Lyft are now among Guests’ choices for getting to the parks from Orlando.

Disney World Guests Need the Convenience of an Airport on property

It’s time to develop and build an airport on Disney World property, as it would serve the millions of Guests who visit the Resort every year. It would also serve as the realization of the dream of a full-service airport that once danced in the creative minds of Walt and those working closely with him–and not anywhere near the old airstrip, which can still be seen from World Drive.

The “Buena Vista” name was one from Walt’s era, but in light of the upcoming 100th anniversary of Disney’s inception, it seems far more fitting to honor the man behind it all and formally register the airport as the Walter Elias Disney International Airport (and hopeful “WED” isn’t already in use by another airport).

No plans for the airport were discussed at the 2022 D23 Expo held in Anaheim in early September, and Disney’s running out of time to make the decision to build an airport–and finish its construction. For the first time since 1967, the sands of time are running out, and Disney no longer has the open-ended freedom to build the airport like it once did. There’s still a window, but it’s actively closing as these words are being read.

Since the passing of the Reedy Creek Improvement Act in the late 1960s, which gave Disney its own special district at Disney World, the company has had the legal right to build anything from an airport to a nuclear plant within the area. (Yes, we’re serious.) But when Florida lawmakers voted to repeal the Reedy Creek Improvement District during a special session in April of this year, the clock began winding down on that right and on that window of opportunity. As it currently stands, Reedy Creek will be dissolved, effective July 1, 2023, and all the special privileges that the Improvement Act afforded Disney will also be dissolved.

But perhaps all they need is a little faith, trust, and pixie dust to complete the project in time–and a different contractor than the one overseeing the construction of TRON Lightcycle Run at Magic Kingdom. (Who knows how long it would take that contractor to construct an airport and render it operational?) That just might be the perfect recipe for an attraction of a completely new kind at Disney World–the Walter Elias Disney International Airport–and the most impressive thing about it? The fact that Disney had it constructed and operational in only a few months!

Disney has always been in the business of making the impossible, possible, so the new airport wouldn’t be completely uncharted territory for the entertainment giant. And just think, if Disney can pull that off, Walt’s memory will be honored in a monumental way, and Universal will never be able to throw shade against Disney on social media again! Win, win, win.