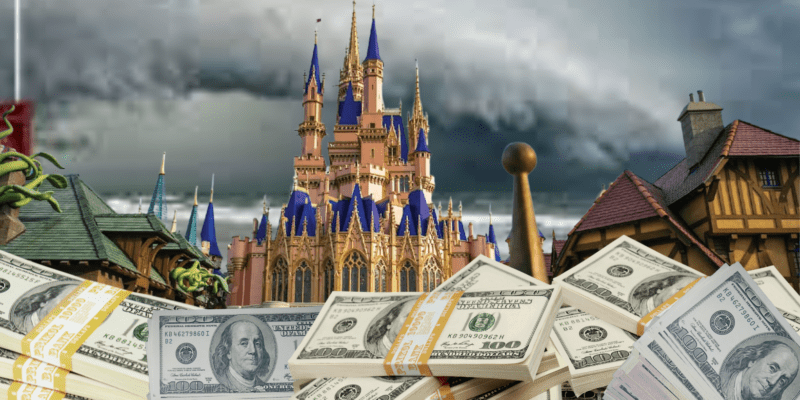 If you’re currently in the Central Florida area, furious at Disney’s decision to close the parks ahead of Hurricane Ian’s arrival near Orlando and fuming with the Guests around you, take heart. Here’s proof Disney World never wanted to close the parks. It’s simply far too costly to do so, and by costly, we mean exorbitantly expensive, but perhaps not as costly as some reports suggest.

Per FOX News, in a report by Market Realist, analysts looked at Disney’s Parks, Experiences, and Products division and its revenue during the fiscal first quarter of 2022. The division reported revenue of slightly more than $7.2 billion over that quarter. Analysts took that total, divided it over 90 average days in a quarter, and came to 80.38 million. That’s $80.38 million per day in revenue across Disney’s Parks, Experiences, and Products (DPEP) division.

It’s important to note, however, that the per-day figure above is what DPEP makes in revenue and that Disney World alone does not earn $80 million in daily revenue. DPEP includes Disney Consumer Products, Games and Publishing, six Resort destinations with 12 theme parks and 53 resorts in the United States, Europe, and Asia, Disney Cruise Line, Disney’s Aulani Resort & Spa, and Adventures by Disney, and it’s the division as a whole that sees more than $80 million in daily revenue.

It’s difficult to know exactly how much revenue Disney World brings the company on its own, as the company doesn’t usually break down its revenue per park, at least in records made public each quarter. But it’s not difficult to see that Disney World is by no means losing $80 million per day because of Hurricane Ian.

After all, that would mean that each day the parks are closed because of havoc brought on by Hurricane Ian, a loss of approximately $3.35 million per hour and nearly $55,800 per minute would be felt by the Most Magical Place on Earth, and even by Disney’s standards, that’s, as they say, “some high livin’.”

“Economists have long watched Disney’s theme parks as informal barometers of consumer confidence,” the report reads. “Historically, when budgets get tight, families cut back on trips to Disney World in Florida and Disneyland in California. That does not appear to be happening: Disney Parks, Experiences and Products reported quarterly revenue of $7.4 billion, up from $4.3 billion a year earlier, and an operating profit of $2.2 billion, up from $356 million.”

Disney Parks around the world temporarily closed in early 2020 in response to the coronavirus pandemic that swept across the globe. But in September of that year, a Deutsche Bank report projected that The Walt Disney Company would begin to see “substantial improvement” in 2022’s fiscal year, as well as a return to full earnings in 2023, based on Disney’s numbers before the COVID-related closures.

For the most recent earnings information from The Walt Disney Company, click here to see the company’s fiscal 2022 third-quarter earnings report.