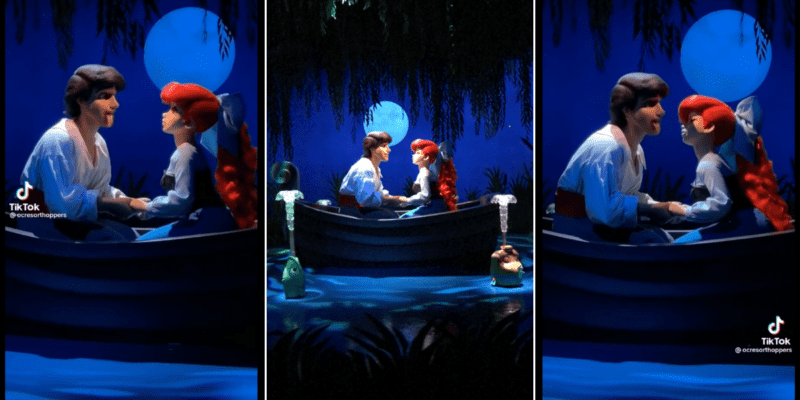 Some surprised Guests recently shared a video from a popular Disney attraction, making viewers wonder if Disney had suddenly changed it.

Disneyland is home to timeless attractions for the young and the young at heart. From original attractions like The Haunted Mansion, Pirates of the Caribbean, and Matterhorn Bobsleds, to rides inspired by different Disney stories, like Peter Pan’s Flight, Pinocchio’s Daring Journey, and Star Tours – The Adventures Continue, there is something to make every Guest’s visit a magical experience.

While these attractions have undergone some changes and improvements throughout the years, a recent video shocked its viewers, who were left wondering if Disney had decided to make a sudden change to a popular attraction.

A video posted by ocresorthoppers (@ocresorthoppers) on TikTok recently went viral, with over 2.7M views, 256.1K likes, and 2.6K comments, shocking Guests with an apparent change to an iconic scene in The Little Mermaid ~ Ariel’s Undersea Adventure, with Prince Eric behaving… inappropriately while trying to “Kiss the Girl.”

Viewers were hysterical when they saw Prince Eric sticking his tongue out during this romantic scene, making hilarious comments like, “Everyone’s first kiss was like this I’m convinced,” “Eric is just in his Meg the stallion era is all,” “this was not part of the scene not eric trying to be freaky on the boat,” and “Looks like he was confused as to where to kiss the girl.”

While many viewers were concerned about this “new addition” to the attraction, commenting it was inappropriate and questioning the reason to give Prince Eric a functioning tongue, others were quick to realize and point out that the video was recorded with a filter on, that added the moving tongue to the character, meaning the attraction remains the same. User @sincitygirl87 even commented, “it’s a snapchat filter people calm down,” adding that the video was “still hilarious.”

Funnily enough, this is not the first time this Disney attraction has been struck by Guests wanting to test virtual filters on the beloved characters, as ocresorthoppers (@ocresorthoppers) shared another video in which both Ariel and Eric can be seen moving their tongues in the attraction’s final scene.

You can see that video below or click here to watch it.

The hilarious videos show that everyone can have tons of fun during the visit to the Happiest Place on Earth, whether by riding a thrilling attraction, hugging their favorite character, or mischievously recording Disney animatronics, adding a filter to create a funny scene like this one.

Disneyland describes this journey under the sea as follows:

What do you think of this video? Did you notice it was a filter when you watched it? Let us know in the comments below!