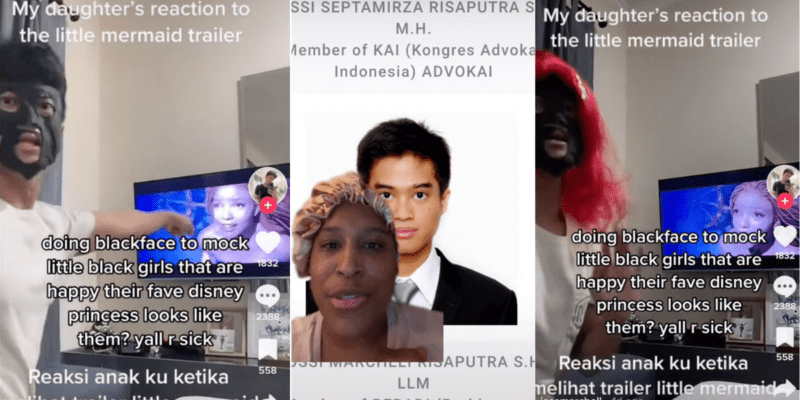 Last week, we shared some adorable viral videos of young Black girls reacting to the trailer for the live-action The Little Mermaid, starring Halle Bailey as Ariel.

Many of the little girls squealed and giggled in delight, realizing that The Little Mermaid (1989) remake would feature a Black Ariel – someone who looks like them! Unfortunately, the film has received racist backlash online.

That backlash culminated in a TikTok mocking the viral videos of the excited little girls, posted by Jossi Marchelli (@jossimarchelli). Marchelli was identified as the brother of a famous Indonesian actress, Acha Septriasa, by TikToker @auntkaren0.

Aunt Karen is known for holding people accountable for their actions on social media. She shared Marchelli’s video and revealed the information she had discovered about him:

Where’d you go? I just wanted to talk.🤭

In the video, Marchelli wears an offensive Blackface mask and points at Halle Bailey on his TV. “She looks like me, mommy,” he says, later putting on an Ariel wig.

Though TikTok eventually banned his entire account, Marchelli initially refused to delete the viral video, explaining in a comment:

“Just woke up and my video is still up 😂. I will continue to follow the rules on TikTok Community Guidlines. Create content from existing rules. I will not delete the video myself”

Aunt Karen said it was “justice time.” She revealed Marchelli’s relation to Septriasa, who has 3.5 million Instagram followers, and asked viewers to tag the actress in her brother’s video. While the actress hasn’t commented publicly, she did limit comments on her Instagram posts.

It was also revealed that Marchelli had studied law at Northwestern University in Illinois.

Less than a day later, Aunt Karen made another video, sharing an article from Indonesian news source Suara:

“All my haters to the back. Because when I tell y’all to stop doubting me, this is what I’m talking about,” Aunt Karen said. “…Now, some of y’all said, ‘Well, he lives in a whole different country. What are we going to do about it?’ Honey, have y’all not watched my TikToks?”

“So much shame and anger has gone towards him that now his family don’t even want anything to do with him. Like, his sister is having to answer for stuff, and she is not happy,” Aunt Karen explained. “Not only that, Northwestern School of Law here released a statement and said that he no longer is a student.”

“The devil works hard, but we work harder,” Aunt Karen boasted. “He doesn’t need to represent anyone in the justice system he’s made his position known concerning his clients,” an anonymous commenter wrote.

Marchelli hasn’t spoken publicly on the removal of his TikTok account or the impact of his video. Some commenters have suggested that Marchelli is a practicing lawyer in Indonesia, though that hasn’t been confirmed.

The Little Mermaid features a star-studded cast, directed by Rob Marshall, with original music by Lin-Manuel Miranda and Alan Menken. Bailey is Ariel, Melissa McCarthy is Ursula the Sea Witch, Jonah Hauer-King is Prince Eric, Javier Bardem is King Triton, Daveed Diggs is Sebastian, Jacob Tremblay is Flounder, and Awkwafina is Scuttle the seagull. It premieres in theaters on May 26, 2023.

Are you excited about The Little Mermaid?