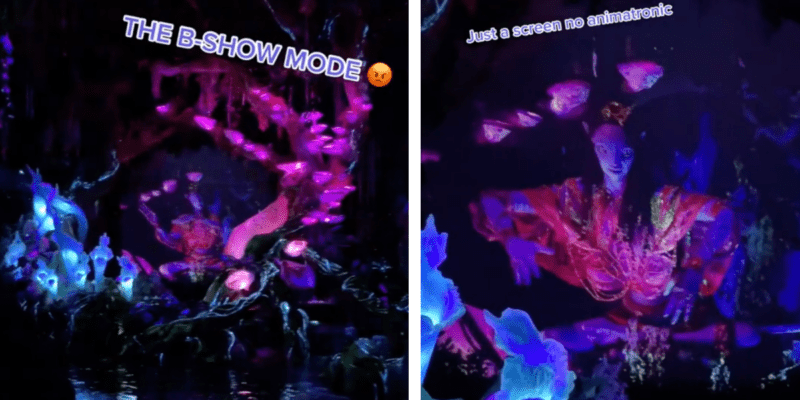 When Pandora: The World of Avatar opened in 2017, Disney Imagineers took care to build the attractions and atmospheric details to be easily repairable. This is especially evident on Na’vi River Journey, a slow-moving boat ride showing flora and fauna on Pandora.

The Shaman of Songs, an impressive and life-like animatronic, is built on a platform that can be easily slid out from the ride for repairs. Disney’s Animal Kingdom learned from its mistake after the Expedition Everest Yeti Animatronic had to be turned off to protect the foundation of the mountain – it has yet to be fixed.

However, when The Shaman of Songs is out of service, the ride doesn’t stop. A screen version replaces it, as shown in this TikTok from @austincastrotv:

Castro waited an hour to see The Shaman of Songs and was disappointed to see a screen instead. “I’d expect this from Universal, but not Disney,” he wrote.

The Shaman of Songs animatronic has since been repaired and returned to its place in Na’vi River Journey.

This dark boat ride opened alongside Avatar Flight of Passage and the rest of Pandora: The World of Avatar at Disney’s Animal Kingdom in 2017. From Disney:

Have you ever seen Na’vi River Journey in “B-Mode?”