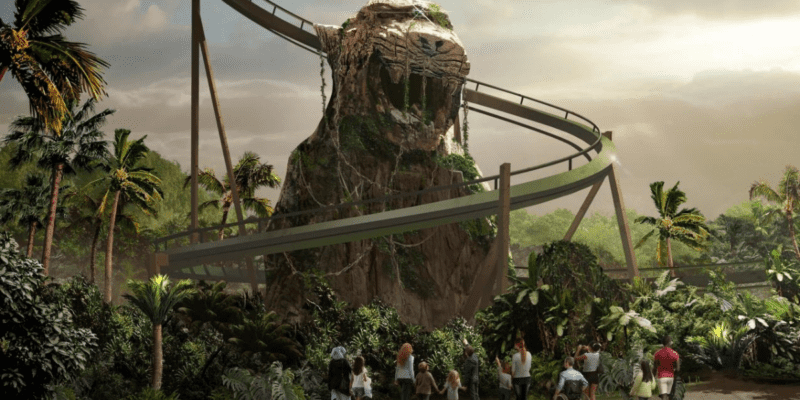 Construction crews continue the accelerated development of the all-new theme park inspired by the 2017 film ‘Jumanji.’

The Jumanji film franchise is coming to life in an all-new theme park inspired by the 2017 film Jumanji: Welcome to the Jungle and its 2019 sequel Jumanji: The Next Level. This jump from the big screen will give fans of the film a chance to live their adventure in a highly immersive theme park scheduled to open at the Chessington World of Adventures Resort in the spring of 2023.

The first images of the highly immersive land were released only last month, with a massive jaguar structure that will welcome parkgoers as they enter World of Jumanji. Additional details regarding other rides or attractions located in the jungle-themed land have not been released, but from the concept art of the land, World of Jumanji will surely be packed with action and fun for the whole family.

Construction crews at World of Jumanji are hard at work with the accelerated development of the theme park, which is already showing significant progress.

Chessington Buzz (@ChessingtonBuzz) has shared some updates on the construction of the 55-foot-tall jaguar that will be the highlight of World of Jumanji. In one of the updates, we can get a closer look at the stone that will be located in the jaguar’s forehead, which will undoubtedly play an essential part in the attraction’s story. There is no information on whether the stone will glow or have any additional effects, as stated by Chessington Buzz, but their commitment to sharing the development of the new land will surely keep us updated.

Not quite… its the eye of the Jaguar though!

Coming soon to the shrine feature in World of Jumanji™

Will it flash? Will there be smoke?

Not quite… its the eye of the Jaguar though!

Coming soon 👁️ to the shrine feature in World of Jumanji™

Will it flash? Will there be smoke?

Of course, it’s hard to ignore that the massive jaguar is nearing completion, with the entire statue wholly covered in plastic and undoubtedly ready to receive the final details and begin the next phase of construction, which will surely involve the tracks for this upcoming attraction. Chessington Buzz (@ChessingtonBuzz) shared another angle from the imposing statue.

Stand by for a host of updates today

Stand by for a host of updates today 👀

The significant progress at World of Jumanji is impressive and will surely have fans of the beloved franchise anxious to visit the land and live their own adventure as Dwayne “The Rock” Johnson, Jack Black, Karen Gillian, and Kevin Hart did in Jumanji.

Sony is also making notable efforts to bring Jumanji to life at other theme parks worldwide, with the first Jumanji-inspired ride opening in April this year at Merlin’s Gardaland Resort in Italy and an entire land inspired by the franchise opening next month at Columbia Pictures Aquaverse in Thailand.

Are you excited to see more Jumanji-themed projects coming to other theme parks? Let us know in the comments below!