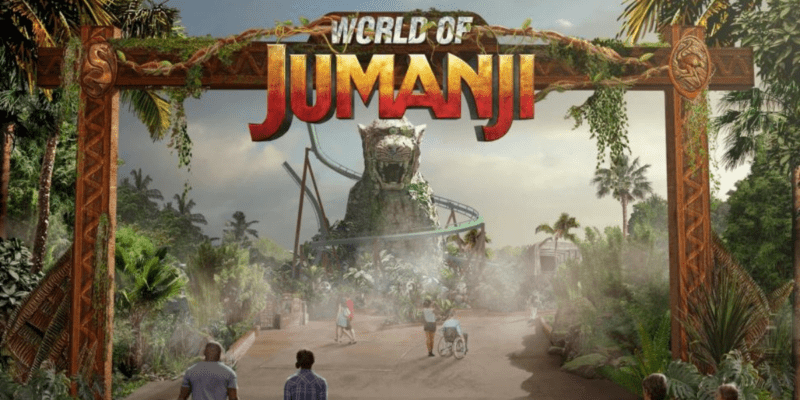 Recent news will have fans of the Jumanji film franchise overjoyed, as a new amusement park inspired by the films will open next year!

The Jumanji film franchise will take a massive leap off the big screen to offer fans the opportunity to live their own adventure in an all-new immersive amusement park in London. This new project will be inspired by the 2017 film Jumanji: Welcome to the Jungle and its 2019 sequel Jumanji: The Next Level, and is scheduled to open at the Chessington World of Adventures Resort in the spring of 2023.

While no specific rides or attractions have been released just yet, concept art for this exciting new expansion shows a 55-foot jaguar structure that will greet parkgoers as they enter World of Jumanji, the jungle-themed world.

This highly immersive new area will involve a $20.5M investment for its development and comes as the result of a partnership between Merlin Entertainments, Chessington’s operator, and Sony Pictures Entertainment. World of Jumanji will be the first ever Jumanji-themed land in an amusement park and the biggest-ever investment in the Surrey Resort’s history.

A Sony executive stated the following in a release:

After being entertained by the films for so many years, fans now have the chance to experience Jumanji in a whole new dimension and we are thrilled to be going on this exciting adventure with the creative team at Chessington as Jumanji further expands with its very own themed land.

Inside the Magic previously reported on a massive partnership between Sony Pictures, the studio behind the Jumanji franchise, and Merlin Entertainments, which owns and operates several theme park brands worldwide, including LEGOLAND, Madame Tussauds, and SEA LIFE.

The first Jumanji experience launched as part of the agreement was the world’s first Jumanji ride, which opened in April this year at Merlin’s Gardaland Resort in Italy. You can read more about this development and Merlin’s partnership by clicking here.

Chessington World of Adventures Resort is one of the most popular destinations for theme park lovers in England, with 128 acres of fun for the whole family. The theme park is home to more than 40 rides and attractions, two themed hotels, and a zoo with more than 1,000 animals.

Are you excited to see more Jumanji-themed projects coming to other theme parks? Let us know in the comments below!

Comments Off on A ‘Jumanji’-Themed Amusement Park Is Coming Next Year!