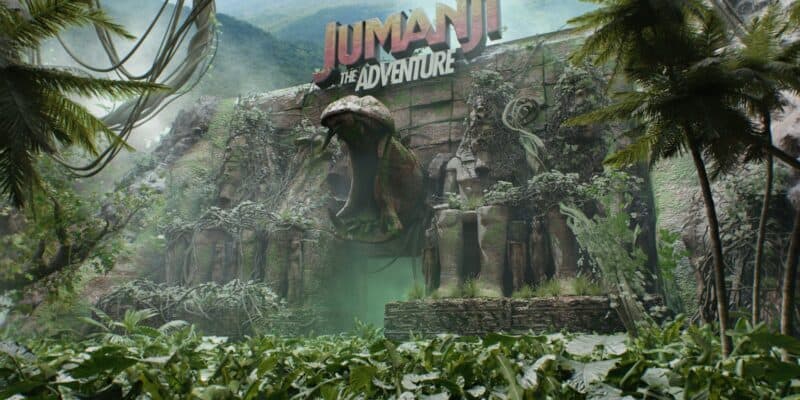 If you grew up watching Jumanji, whether it be the original or the new adaptation, we have exciting news for you.

Jumanji was first released in 1995 starring Robin Williams, Bonnie Hunt, Kirsten Dunst, Jonathan Hyde, and David Alan Grier. The story centers on a supernatural board game that releases jungle-based hazards upon its players with every turn they take. In 2017, Jumanji: Welcome to the Jungle was released starring Dwayne Johnson, Jack Black, Nick Jonas, Karen Gillian, Kevin Hart, and more. This movie used video games as the trap where the players were trapped as their characters in the game. Then in 2019 Jumanji: The Next Level was released as a sequel.

With so much adventure packed into the films, it is easy to imagine the Jumanji franchise taking a Jurassic Park turn, and becoming a theme park option for Guests. Now, that fantasy is turning into a reality. Due to a joint partnership between Sony Pictures Entertainment and Merlin Entertainments, Gardaland Resort in Ronchi, Italy, home to a theme park, Legoland Water Park, Sea Life Aquarium and multiple hotels, will soon be home to the world’s first Jumanji-themed ride. There will also be Jumanji-themed rooms launching on April 2, 2022 along with the attraction.

The attraction is called Jumanji – the Adventure and it seems another attraction based on the Dwayne Johnson IP will be ready for debut in 2023.

Merlin Entertainments has entered into a formal multi-territory exclusivity agreement with Sony Pictures Entertainment, to develop and operate attractions, rides, lands, retail outlets and themed hotel rooms based on the studio’s box office hit Jumanji film franchise across Merlin’s Resort Theme Parks and Waterparks in Europe (including the UK) and North America.

The first Jumanji experience to be launched as part of the agreement will be the world’s first Jumanji ride, which will open in April this year at Merlin’s Gardaland Resort in Italy, with a second activation already in development at a different theme park for a 2023 launch.

The massive theme park company went on to explain:

The deal supports Merlin’s broader global strategy to engage and work with leading IP and brands across its global estate, with existing successful partnerships including LEGO, Marvel, Peppa Pig, and CBeebies. The agreement is also a pivotal step in Sony Pictures’ larger global strategy to grow and expand location-based entertainment by utilizing its strong global film and TV brands to create opportunities for audiences around the world to immerse themselves deeper into the studio’s stories.

The collaboration further builds on Merlin’s successful relationship with Sony Pictures Entertainment, which has already seen the previous roll out of two “in-attraction” themed experiences including the Ghostbusters 5D ride at Heide Park in Germany and the Ghostbusters experience at Madame Tussauds New York.

It seems that this attraction will have elements of danger involved, however, it is meant to be a dark ride for all ages. That means we will likely not see any coaster simulations in the attraction, much like Indiana Jones Adventure in Disneyland which has a similar aesthetic, or VelociCoaster at Universal Orlando Resort.

Dwayne “The Rock” Johnson has had his hand in a ton of different theme park franchises. Johnson is well-known to Disney fans for various roles in films, including Moana and The Jungle Cruise, and at Universal Orlando Resort and Universal Studios Hollywood his Fast & Furious character can be seen in the Tram Tour as well as Fast & Furious — Supercharged. Having Johnson’s films continue to expand globally into theme parks will only continue to show the actor’s reign and popularity within these IPs.

Would you want to ride a Jumaji attraction?