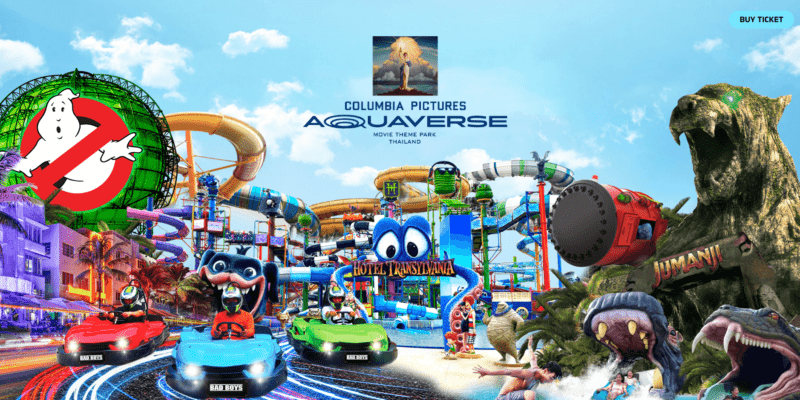 There’s an all-new theme park nearly ready for opening day that will home attractions inspired by some of your favorite movies.

Amid the constant competition to see which is the best theme park in the world, an unexpected contender is about to take the spotlight with a brand-new theme park packed with attractions inspired by some of the most popular films like Jumanji, Ghostbusters, Bad Boys, and Hotel Transylvania.

Columbia Pictures Aquaverse is scheduled to open on October 12, 2022, making it the first theme and water park developed by the Sony Group. The project was delayed for roughly a year by the COVID-19 pandemic but is now ready to open its gates in Pattaya, Thailand.

The Aquaverse Park will be home to a mix of land attractions, water features, themed zones, restaurants, and live entertainment. Some of the themed areas are based on popular movie franchises from the Sony Group, including Hotel Transylvania, Ghostbusters, Jumanji, and Surf’s Up. Other upcoming areas for this new theme park will be based on Zombieland, Cloudy with a Chance of Meatballs, and The Emoji Movie.

The opening of Columbia Pictures Aquaverse represents Sony’s first step toward the location-based entertainment operations of the most significant conglomerates like The Walt Disney Company and Universal Studios.

The first phase of the Columbia Pictures Aquaverse project covers an area of 13.8 acres. It is expected to play an essential part in developing Thailand’s Eastern Economic Corridor, making Pattaya even more attractive for tourists. The Park is expected to receive a million visitors per year, and if that target is reached, Park operators aim to develop a second phase that could open in ten years.

While this is the first attempt from Sony to develop an entire theme park inspired by its popular film series, there have been other attempts to bring Jumanji to life through different attractions and even a complete themed area currently in development at Chessington World of Adventures Resort.

Related: A ‘Jumanji’-Themed Amusement Park Is Coming Next Year!

Would you like to visit Columbia Pictures Aquaverse? Let us know in the comments below!