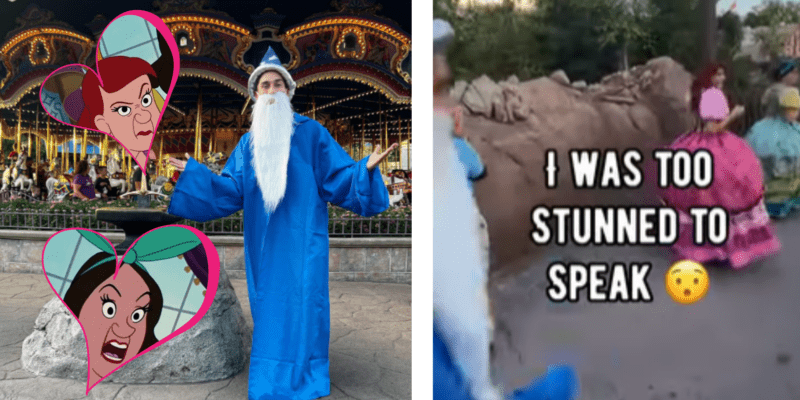 There’s always a lot of buzz about Mickey’s Not-So-Scary Halloween Party at Magic Kingdom at the Walt Disney World Resort. Tickets for the spooky event go on sale early and sell out quickly, as Guests rush to secure a date to enjoy the Halloween-inspired event that is finally back in 2022 after a COVID-induced hiatus.

Some Guests come for the pumpkins, some for the spooks, and most for the candy, and occasionally, Guests attempt to make a love connection at the not-so-scary Disney event. But as one Guest discovered, Mickey’s Not-So-Scary Halloween Party wasn’t designed to be an alternative to speed-dating.

In a viral post on Instagram, a Guest dressed as the wizard Merlin from Disney’s The Sword in the Stone attempts to talk to Cinderella’s evil stepsisters, Anastasia and Drizella. But when he says that he knows the young ladies are looking for a suitor, he’s immediately roasted by the diabolical duo, as seen in the video. After all, they do have their standards to consider.

Merlin approaches the stepsisters, and the fiery exchange ensues. In only seconds, the stepsisters have effectively roasted the young Guest and left him speechless.

“Excuse me ladies,” he begins, to which one of the sisters responds, “Do you have magic?”

“I do,” he returns, “and I know you’re looking for a suitor, but what about a magician?”

But his hopes are dashed, and his offer is loudly rejected as the sisters respond with, “Well, we’re kinda looking for someone who can actually pull the sword out of the stone.”

The Guest then turns toward the camera, speechless. When he gathers his composure, he says, “I mean, they got me on the sword in the stone,” and while it would seem that the Evil Stepsisters roasted him alive during the brief exchange, they might have actually encouraged him in the process.

The Guest dressed as Merlin is digital creator and Instagrammer JoJo Crichton, and with nearly 50,000 followers to his credit, he probably shouldn’t have been surprised that the Evil Stepsisters recognized him–even with his long white beard. Several weeks ago, Crichton posted a video in which he was unable to pull the sword from the stone near Prince Charming’s Regal Carrousel in Fantasyland at Magic Kingdom. He also shared footage of other Guests removing the stubborn sword from its cave in the stone with ease.

It seems very obvious that the Evil Stepsisters are trolling JoJo on Instagram. Who knew?

Maybe next time JoJo will remember the wisdom of Merlin from The Sword in the Stone, as he explains the power of love:

“That love business is a powerful thing. Greater than gravity? Well, yes. In its way, yes, I’d say it’s the greatest force on Earth.”