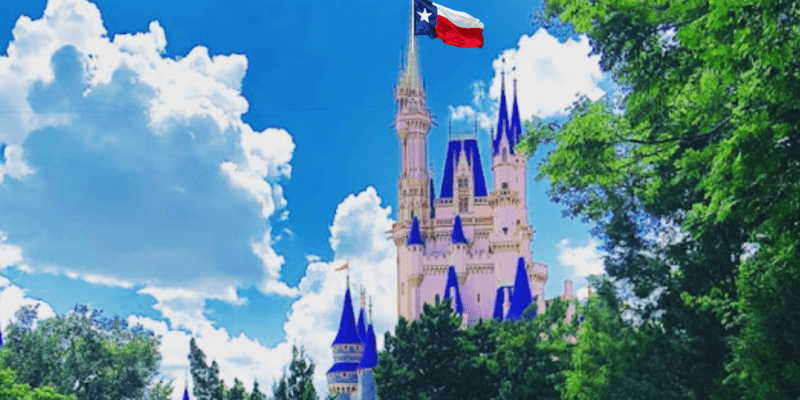 Fans who frequent the theme parks at the Walt Disney World Resort are aware of several things that first-time Guests couldn’t possibly know, which is understandable, as Fodor’s and other publications and sites simply can’t cover every single bit of information about the parks; the Disney World Resort is simply too large, and its offerings too vast.

And first-time Guests visiting from the state of Texas are especially in for a shock because of a decision Walt Disney made more than 80 years ago.

There are exceptions to every rule, but on the whole, true Texans can be some of the most welcoming and friendliest people you’ll meet. (Again, there are those exceptions.) It comes with the territory–literally and figuratively. Texans love chatting up strangers, and they love their “Friday Night Lights,” a phenomenon that takes over the state every autumn at high school football stadiums across the massive Lone Star State (some 268,000 square miles of it), and speaking of football, Texans love their Cowboys, though that’s not the only NFL team you’ll find deep in the heart of Texas.

Most Texas households have at least one truck (whether they own cattle and horses or not), and it’s often the “Texas Edition” version of that particular truck.

They love their Whataburger, their Schlitterbahn, tubing on the Guadalupe River, Buc-ee’s, and barbecue. They love chatting up strangers and “blessing their hearts.” And Texans love their Dr. Pepper.

For a lot of them, Dr. Pepper isn’t just another beverage. It’s one of the many long-standing traditions in the state, some of which must be explained more than once to non-Texans. (But that’s ok because Texans are well-versed in striking up conversations with people they didn’t know existed only moments before.)

Dr. Pepper hails from the Central Texas town of Waco and was first manufactured and sold in 1885. (There’s even a Dr. Pepper Museum in Waco.) But it would be several years before non-Texans finally met Dr. Pepper up-close and in person at the 1904 World’s Fair.

People from Texas really like their Dr. Pepper, and they’re in for a big shock the first time they visit the Walt Disney World Resort and discover that the famous Texas-favorite beverage simply isn’t available in any flavor in the parks. And that presents a big problem for some Texans; they love it that much! And for the life of them, they simply don’t operate with a mindset that would choose Coca-Cola over Dr. Pepper; it just doesn’t make sense to them.

But the absence of Dr. Pepper at Disney World isn’t an oversight, a misunderstanding or a snafu. On the contrary, Guests find Coca-Cola products at the Disney World Resort thanks to a partnership created by Walt Disney himself about 80 years ago. According to Disney Parks Blog, Walt Disney made the decision to partner with Coca-Cola in 1942, years before the world had ever seen a Disney Park.

His love affair with the soft drink manufacturer began that year with an appearance by Walt disney on a radio program owned by the beverage maker:

“Our relationship with Coca-Cola started in 1942 when Walt Disney first appeared on the Coca-Cola radio program ‘The Pause That Refreshes on the Air.’ In fact, back in 1950, Disney’s television special, “One Hour in Wonderland,” was sponsored by The Coca-Cola Company! And when Disneyland opened on July 17, 1955, our friends at Coke were right there alongside us, sponsoring Refreshment Corner on Main Street U.S.A.”

The partnership most likely began as more of a necessity, as Walt needed more funding to build all he wanted to build at Disneyland. To that end, he garnered support from corporate sponsors for individual attractions. For example, when Disneyland opened in 1955, Coca-Cola sponsored the Coca-Cola Refreshment Corner, and Pepsi-Cola sponsored the Golden Horseshoe.

But alas, Dr. Pepper has yet to have the good fortune of Coca-Cola and Pepsi-Cola, but there’s always room for improvement. So for now, Texans will have to bring their own bottles of Dr. Pepper into the parks or take a vow of abstinence from Dr. Pepper while they’re at the Walt Disney World Resort. (But if you bring glass bottles of Dr. Pepper, you’ll shed tears as you mourn their loss, as they’ll be confiscated since glass bottles are prohibited at Disney World.)

Sorry, Lone Star Staters. The absence of Dr. Pepper at Disney World can surely seem unmagical, unimaginable, and perhaps even unwelcoming. So if you’re heading to Disney’s Central Florida parks soon (or to Disneyland in California), prepare for a shock. We can only hope this post lessens the sting of that shock.

And while we’re talking about things Texans won’t find at Disney World, it’s worth noting that the closest Buc-ee’s is more than 70 miles from the Walt Disney World Resort, and if it’s an H-E-B you’re looking for, well, you just need to keep on going–second star to the right and straight on till Texas.