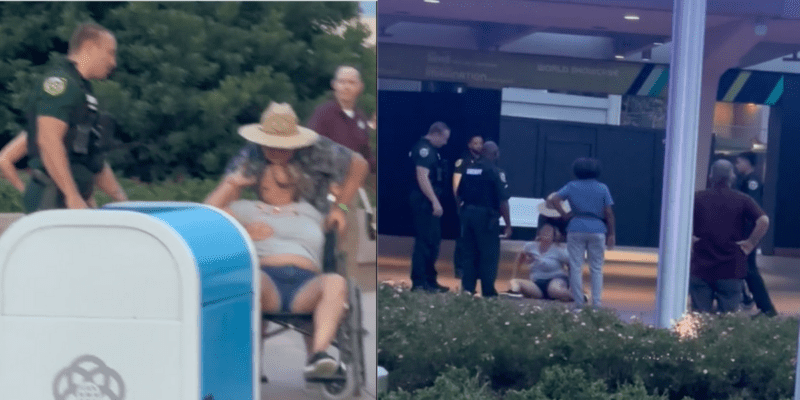 A Walt Disney World Resort vacation is supposed to be a magical experience that your family remembers forever. Unfortunately, one EPCOT Guest’s vacation is now a memory that thousands of people will never forget.

Adriana Perez (@corasmomster) was just one of a few Guests to share videos of an altercation at EPCOT this week. Perez was leaving EPCOT when she began recording a belligerent, drunk Guest surrounded by Disney security and police officers:

On our way out of Epcot, we encountered a little situation 👀 #viral #fyp #epcot #disneyworld #mostmagicalplaceonearth#drunk#fypシ#disneydrama

The first video appears to take place in the United Kingdom World Showcase pavilion. The Guest’s party holds and tries to shove her out of EPCOT. “I’ve done nothing wrong,” she screams. Eventually, she is put into a wheelchair and pushed. Disney Security Cast Members, management, and police officers follow.

The second video appears to occur in World Celebration after the Guests have exited the World Showcase. The Guest tries to stop the wheelchair multiple times. At one point, she tells her husband, “They’re going to beat me.” He replies, “They’re not going to beat you.” “Yes, they are,” she says.

The video cuts and the husband holds the Guest down as she tries to get out of the wheelchair to approach a sheriff. “Look at me, look at me in my eyes!” she repeatedly yells while turning to face the officer. Her husband continues pushing the wheelchair.

@corasmomster This lady had all these cops plus more waiting outside the park 👀 I’m still trying to figure out why it escalated to this?! Anyone who was there and knows, please elaborate. I’m genuinely curious. #fypシ #epcot #viral #cops #drunkatepcot #foodandwinefestival2022 ♬ original sound – Adriana Perez

This video takes place closer to the Disney Park entrance by Spaceship Earth. The Guest throws herself to the ground, and her party tries to pick her up. After standing up, she points and yells at police officers. She gets back in the wheelchair and gives the officers the middle finger as she’s pushed out of EPCOT.

The Guest stands up to chase police officers. Her husband accidentally throws her to the ground in an attempt to force her back into the wheelchair. She continues to swear at police officers as her husband attempts to pull her away.

Perez later posted another video explaining what she saw:

Replying to @jazzlettuce97 I am only able to talk about what I witnessed. For those of you asking why I started recording, originally it was to show my parents what was happening on the one day they do not join us. From what I can see going around, clearly I was not the only one who posted 👀

“There was a lady who was drunk being asked to leave, and I’m assuming she was not happy about that,” Perez explains. “So she started being really belligerent towards the cops. She started trying to slap them, punch them. She was saying, ‘F**k you.’ She was saying, ‘You have every right to take me to jail. I’m not going anywhere. Take me to jail. I want to go to jail.’”

Related: Guests Argue Alcohol Should Be Banned in Disney Parks

As seen in the videos, Perez explains that the husband and daughter try to drag the Guest away as she tries to “swing” at the police.

“The daughter actually gets in front of her and tries to slap her and punch her and shove her face away from the officer. All while that’s happening, the husband is just trying to get her on the wheelchair,” Perez says.

Perez says she took more videos as they walked out of EPCOT but decided not to post them due to the attention the situation has received on multiple accounts. “I’m sure there’s more than enough going around on the internet already,” she explains.

@blue_bird412, who was working at EPCOT that day, corroborated Perez’s story. She commented that the situation was “definitely something else.”