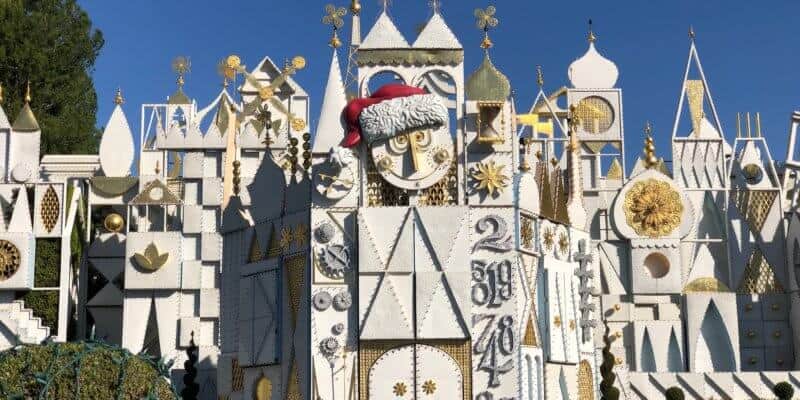 Since April 11, the iconic façade of “it’s a small world” has become enchanted several times each evening with a brief visual montage that pays tribute to Disney’s hit 2021 movie, Encanto.

This musical delight comes to life through projection and lighting effects and an artistic style inspired by the lyrics, with select moments that feature characters from the film. Like the Madrigal family’s Casita, tiles across the “it’s a small world” façade flip, turn, and rearrange themselves as one scene transitions to the next, culminating in a celebratory chorus and a nod to Bruno’s mysterious prophecy about Mirabel.

Related: Disney May Have Leaked All Of Its D23 Announcements

During this experience, Guests can see “the magical moment when the whimsical façade of this classic attraction becomes enchanted with a visual montage paying tribute to the hit song “We Don’t Talk About Bruno” from Disney’s Encanto.”

The experience has been super popular since it was revealed, but as of today, September 2, there are no more scheduled showtimes. You can see this for yourself when you visit the official website.

While we will have to wait and see later tonight if Disney has actually stopped the show, this is typically how Disney goes about reducing or canceling showtimes of limited-time events.

If you’re sad about this experience ending, not to worry! Disney California Adventure has plenty to offer Guests as they walk the roads Walt had in Hollywood, enjoy a hand-dipped corn dog at Award Wieners, and check out the new Marvel-themed land in Avengers Campus, where they can meet Spider-Man, Loki, Ant-Man, Black Widow, Doctor Strange, and so many more characters.

Don’t forget to check out the glowing lights in Cars Land and ride Radiator Springs Racers. And of course, you have to ride WEB SLINGERS: A Spider-Man Adventure and Guardians of the Galaxy: MISSION BREAKOUT. Rock on the Silly Symphony Swings as well, and go catch Jack-Jack on Incredicoaster!

More on the Encanto experience below:

For a limited time, watch with delight as a light projection show animates the façade with a montage that pays tribute to the Encanto hit song, “We Don’t Talk About Bruno.”