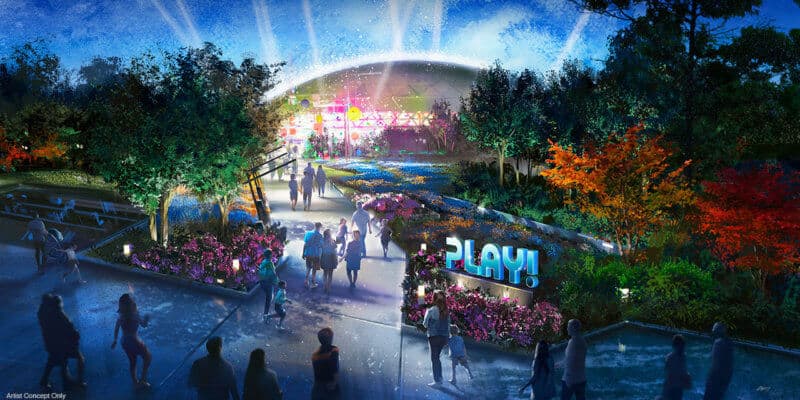 In 2019, the D23 Expo had a plethora of exciting announcements for Disney fans, one of those being an announcement that EPCOT would be receiving a complete overhaul.

Unfortunately, the Coronavirus pandemic shut down Walt Disney World Resort, and with it, many projects were put on hold. Spaceship Earth’s refurbishment has been pushed back to an unknown date, and we have not seen or heard of any further developments regarding Cherry Tree Lane.

A lot of these projects were entirely left out of the 2022 D23 Expo. However, work has resumed on the PLAY! Pavilion, something we had assumed had been entirely abandoned.

This pavilion was not mentioned at all during the showcase, but a few photos were snapped of workers on top of the iconic dome building recently, which you can see in a tweet from Jimmy Pullano (@PullanoJimmy):

multiple workers on the roof of the Wonders of Life pavilion this morning.

@SirBrayden multiple workers on the roof of the Wonders of Life pavilion this morning. pic.twitter.com/o3LSg4CsIA

Related: Iconic Disneyland Attraction Rumored to be Closing in Near Future

The PLAY! Pavilion was originally scheduled to open in time for Walt Disney World’s 50th anniversary, though at this point, that is definitely not going to happen.

Disney’s current description of the World Discovery no longer mentions the PLAY! pavilion, and now that we can see the progress in the area, it seems that the fate of the pavilion remains unknown. Disney has not yet noted formally that the pavilion has been scrapped, but it is interesting to see it removed from the site in certain areas.

Is there a Disney World project you’re most excited about?