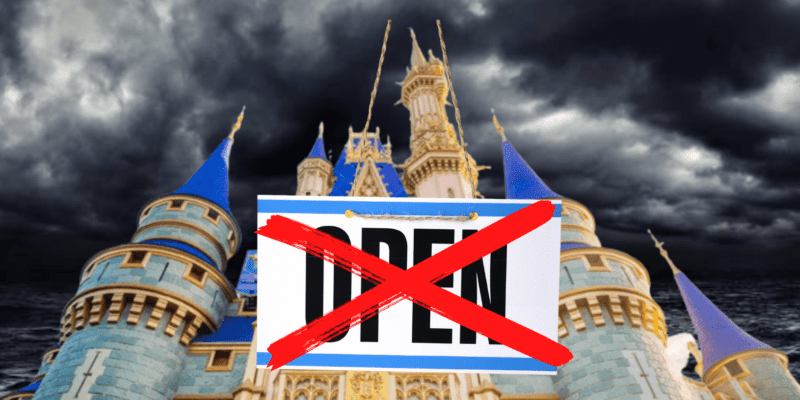 On Wednesday, Hurricane Ian made landfall in Florida, bringing with it near-Category 5 wind speeds, torrential rainfall, and flooding. As the storm continued on its path to the northeast, it weakened, arriving south of Orlando as a Category 1 storm. But high winds and flash flooding have rendered much of Florida–even areas far removed from the western coastline–non-operational.

The Walt Disney World Resort announced on Tuesday its plans to close the parks on Wednesday and Thursday as Ian’s path and strength remained uncertain. The same was true of Universal Orlando Resort, Sea World, Legoland, and other hotspots in Central Florida. But Disney’s hopes were that the parks could reopen on Friday, and now, it seems that may not be possible.

In a post online, Redditor Faptin580 says he learned that Disney World’s parks will not reopen on Friday, as previously hoped, as he recounted a conversation he had with a Cast Member at while he was staying at Disney’s Port Orleans Resort:

“Staying on site at Port Orleans, was chatting to the Cast Members there about the parks opening this weekend. Was told CMs are being notified that parks on Friday will also be closed for Hurricane Ian, and Saturday might be a late afternoon start. They said they should be announcing it to everyone later today.”

As of mid-morning Thursday, Disney World had yet to make an official announcement about an official reopening date for the parks, but the decision to remain closed certainly isn’t outside the realm of possibility, especially given the amount of flooding experienced at the parks.

On Tuesday, Disney World told Guests who held park tickets affected by the Resort’s closing that the expiration date for those tickets would be extended to September 30, 2023.

Disney World’s Resort hotels remained open throughout the storm’s arrival, and Guests were given shelter-in-place directives. Some of Disney’s hotels offered arts and crafts, complimentary arcade games, and even character encounters. Some Guests became frustrated when they were told there were no rooms available at the Resort hotels, especially those who had been at the resort before Ian’s arrival and simply wanted to extend their stays.

RELATED: These are the 5 Kinds of Guests That Show Up During a Hurricane Ride-Out at Disney World

As this is an ever-evolving situation, we will continue to provide updates about closures, reopenings, damage from the storm, and more as new information becomes available.