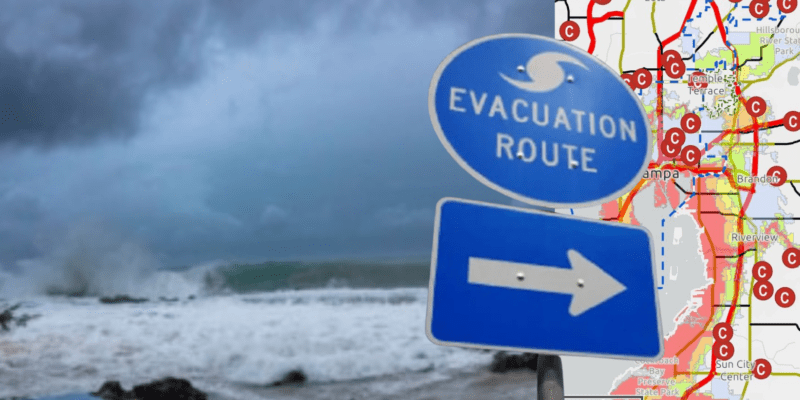 On Tuesday morning, as Disney World announced limited availability at its Resort hotels, Governor Ron DeSantis issued an update about Hurricane Ian as the storm made landfall in Cuba, urging Floridians to start preparing for the storm’s arrival if they haven’t done so yet, especially as the approaching storm may impede communications before the hurricane makes landfall in Florida.

“You still have time today to execute what you need to do,” DeSantis said. “There’s going to be interruptions in communications; plan for that.”

Florida’s Emergency Management Director, Kevin Guthrie, urged residents to clean up their yards and rid them of any loose objects that could act as projectiles during the storm, thanks to the high winds Ian is expected to bring to the Sunshine State.

Hurricane Ian strengthened to a Category 3 storm on Tuesday as it made landfall in Cuba.

Next stop on Ian’s projected path: Florida. The hurricane is expected to make landfall in the state on Wednesday afternoon between Tampa and Fort Myers along Florida’s Gulf Coast. But as is characteristic of hurricanes–and has already been the case with Ian–the storm’s track, as well as the timing of its Florida landfall and its intensity could still change.

The forecast for Tampa Bay includes storm surge of up to 8 feet, down from earlier projections of 10 feet. But storm surge forecasts for Fort Myers could be as high as 12 feet.

Current models project the storm to be a Category 3 hurricane as it makes its way onto Florida soil from the Gulf of Mexico.

According to ABC News, DeSantis said the biggest threat posed by Hurricane Ian in Florida is that of catastrophic flooding, but he encouraged residents, saying there’s still time to make preparations or to evacuate, adding that approximately 2.5 million Floridians are under mandatory or voluntary orders to evacuate.

The Tampa Bay Times was a bit more assertive in its directive to Floridians in the area to make preparations, saying in a headline on Tuesday, “For the love of . . . please get ready for Hurricane Ian; now is not the time to hang out in the pool and drink margaritas.”

At the time of this post, tornado watches have already been issued in Miami, Fort Lauderdale, West Palm Beach, Naples, and Key West ahead of Hurricane Ian’s arrival. Each expires at 5:00 p.m. on Tuesday evening.

The new projections for the hurricane’s landfall indicate a significant shift of the path to the east, now with Ian expected to make landfall Wednesday night into early Thursday morning in the Tampa Bay area as a Category 3 storm.

A hurricane at this level has sustained wind speeds of between 110 and 129 miles per hour. Category 3 hurricanes are also capable of snapping shallowly rooted trees, which can block roadways. In a Category 3 storm, near-total, if not total power loss is expected, and the outages can last for days or weeks, according to the National Weather Service. Category 3 storms are considered major hurricanes.

Should the storm directly hit Tampa Bay, it will be the first time it has happened since 1921. Ian is moving slowly, a characteristic that is forecast to bring more than 15 inches of rainfall from Tampa to Orlando, making major flooding possible in Tampa, St. Petersburg, and Orlando near the Walt Disney World Resort.