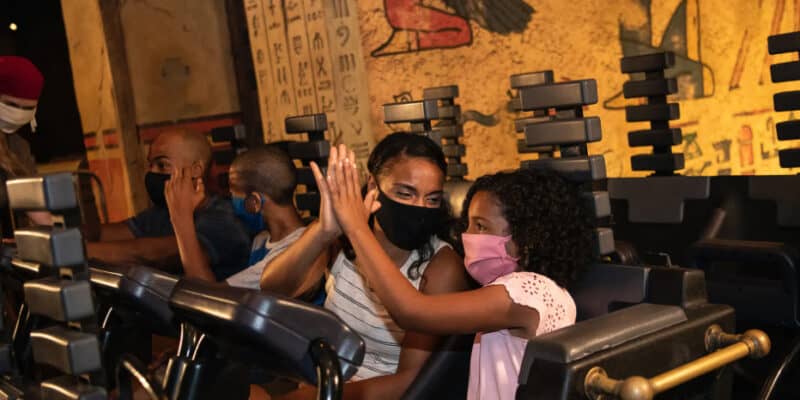 If you have kept up with the Universal Resort in Orlando, you will, unfortunately, know that Revenge of the Mummy has been closed for an extensive refurbishment since January. Universal has given no word on when the ride will officially return.

Recently, we reported that a reopening date might have been leaked by Universal Team Members, with guests claiming they were told the ride would return on August 2. This date came and went, however, with no official word on when the ride will reopen still. However, the ride did return earlier today for “technical rehearsals.”

Related: Did Universal Add ‘The Simpsons’ to the Park Too Late?

If you were wondering what exactly has been changed, well, that’s still under wraps too. But, we recently were clued in on what to expect from the recently-upgraded attraction, and you can see this in a tweet down below from Orlando Informer (@OrlandoInformer):

Here’s what guests can expect from the newly reopened Revenge of the Mummy:  Enhanced visuals  Refreshed effects  The one and only Brendan Fraser – sans one cup of coffee

Here's what guests can expect from the newly reopened Revenge of the Mummy:

⚰️ Enhanced visuals
🪲 Refreshed effects
☕️ The one and only Brendan Fraser – sans one cup of coffee pic.twitter.com/pf8LBinXnd

So there you have it. While vague, it’s exciting to know that we can expect better visuals as well as improved effects. The attraction was notorious for all of its elements, especially the segments with the fire. Even without all of the effects, the coaster is still fun and thrilling, but we can’t wait to hop on the attraction once it finally returns.

More information came out thanks to a tweet from Amusement Insider (@AmusementInside):

Mummy has quite a few small changes during ride that seasoned riders will notice, some good, some bad imo, most notably much slower dispatch timings. Capacity is lower for right now.

Mummy has quite a few small changes during ride that seasoned riders will notice, some good, some bad imo, most notably much slower dispatch timings. Capacity is lower for right now. pic.twitter.com/ytK3LDYaAr

Stay tuned for more updates on this ride!