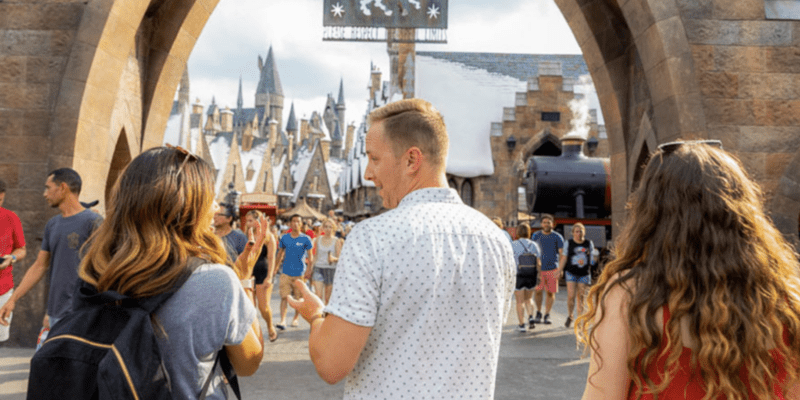 At the Universal Studios Resort in Orland, Florida, there are near limitless experiences for Guests to enjoy. From delicious food and snacks to incredible rides and attractions, there’s something for everyone at the Resort.

Universal Orlando is also currently in the process of expanding, with Epic Universe, Universal’s newest Park, just on the horizon.

While the theme park does not currently have an official opening date, the latest word is that it will likely be open in 2025, and after a long pause in development due to COVID, construction has started back, and we are finally beginning to see things take shape.

There are so many great rides for Guests to enjoy as well in Universal Orlando. From Jurassic World VelociCoaster to Hagrid’s Magical Creatures Motorbike Adventure, thrill seekers and coaster enthusiasts are sure to get a kick out of what the Resort offers. However, one Guest shared their very unfortunate and disgusting experience of being puked on while riding one thrill ride at Universal.

The ride in question was Harry Potter and the Forbidden Journey, a ride notorious for its ability to induce motion-sickness in riders. The ride is located in the Wizarding World of Harry Potter and uses KUKA technology, allowing the seats to move in a variety of ways while being held above the track by a giant robot arm. The ride takes Guests through a series of screens and projections, along with physical objects and sets. While onboard, Guests will encounter Hogwarts castle, the Whomping Willow, Dementors, and a Quidditch match.

Since the Orlando version first opened in 2010, the ride has been a smash hit among Harry Potter fans as well as casual theme Park-goers

The story begins with the Guest coming to the realization that they had been covered with some type of fluid a the end of the ride:

“I had a friend in town, it was our second ride on FJ so we took the single riders lane and I had him go ahead of me. So you know, we count to 3, say observatory, and we’re flying! But wait. Was that a rogue mister? What is that weird smell? We were in the forbidden forest by the time I realized the man next to me was mightily hurling his guts out, which continued for the entirety of the ride”

After realizing they had been puked on, the Guest then disembarks the attraction:

“my entire left side is completely covered with puke and it’s just, coating the divider between seats. The woman on his left had been wearing a white pant suit and I actually felt worse for her than for me. They led me to what I now think of as “the punishment chair”, that ride vehicle seat that is in the queue to test. The puking man and his family had been ushered into the uh, clean up room? That is directly across from that chair.”

The Guest leaves the ride and sits in what they refer to as the “punishment chair,” the replica ride vehicle that Guests can test out before actually boarding the attraction. The Guest then goes on to describe the sick Guest:

“He was very sick. After he and his family left the clean up room, a TM had to go inside and sanitize it because he got sick in there too. The entire time I had just been sitting in the punishment chair, half covered in vomit, staring at the door to the clean up room. I got some sympathetic glances, other folks just kind of giggled. When I finally got in the room, I was offered an XXL plain white teeshirt that kind of hung on me like a dress, but it was better than the puke shirt. They couldn’t help me out with my shorts, though”

The Guest then describes how the ordeal ended:

“About an hour after the ordeal began, I met my friend at the Hog’s Head, and decided that my teeshirt dress wouldn’t do. We went to Guest Services, where I explained the situation and brandished my puke shirt. They ended up taking me shopping at the Port of Entry shop, and I was able to get a new shirt (that fit) and some men’s shorts (that didn’t), but it was better than before!

And that is my tale, of what happens when you are on the business end of a protein spill.”

Luckily the Guest was able to replace their ruined clothes, as is typical at both Universal and Disney. We wish we had advice on how to avoid this predicament, but if you’re a roller coaster enthusiast, it just comes with the territory!

Have you ever had something like this happen to you?