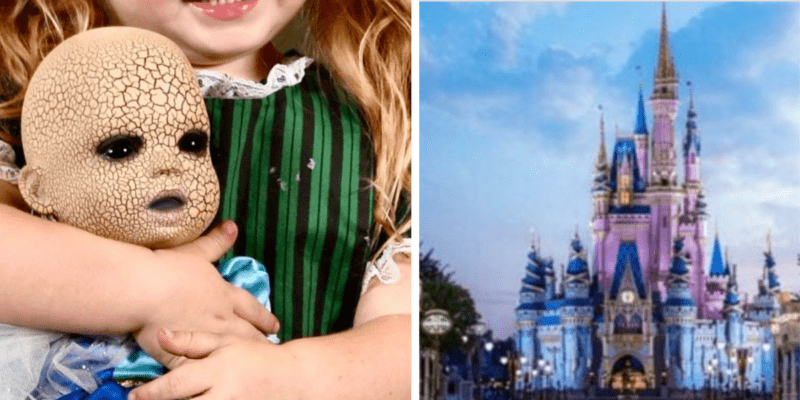 It’s not often that a doll attracts so much attention at Walt Disney World Resort.

As you walk around the Disney Parks, you’ll likely notice hundreds– if not thousands– of children holding dolls of some sort. From Mickey Mouse and Minnie Mouse plushes, to dolls of their favorite Disney Princess, to action figures featuring characters from Marvel and Star Wars, and everywhere in between.

However, a recent trip to Disney World resulted in a great amount of attention being placed on one doll in particular.

Brittany Beard recently shared her story on a trip to Disney World that resulted in some major perks for her family because of her 3-year-old’s “creepy” doll.

The doll was bought at Spirit Halloween and Briar– the 3-year-old– insisted on dressing up “Creepy Chloe” in Disney princess outfits.

“This is what it looks like when you take your 3-year-old to the Spirit Halloween store, and she absolutely insists on buying the creepiest baby doll you’ve ever set eyes on. She said, “But I’m it’s mommy and it needs me!” Briar named the doll, Chloe and I then immediately nicknamed her Creepy Chloe. I’m pretty sure Creepy Chloe is stealing my soul when I sleep.

Yesterday we went to Magic Kingdom and Briar insisted on dressing Creepy Chloe in a princess dress and bringing her along. Because creepy babies need Disney magic too I guess? So I dug out Briar’s Haunted Mansion cast member dress to carry through with the theme.”

Little did the family know what special perks would be waiting for them as Disney Cast Members laid eyes on the doll. First, it was at breakfast at the Grand Floridian.

“While eating breakfast at the Grand Floridian cafe, they brought out the cast member pastry chef to meet Briar and Creepy Chloe because apparently she loves all things spooky,” Beard said. “She said she adored that Briar loved the doll and at the end of the meal, she suprised Briar with an amazing spooky cupcake and a mini handmade chocolate Haunted Mansion poster. It was actually really sweet!”

Then, a fun photoshoot.

“Then we walked over to Magic Kingdom where Briar had a photoshoot with Creepy Chloe,” Beard shared. “The photographer was eating it up and kept coming up with posing ideas for Chloe. I’m sure it was quite a unexpected change from her usual never ending line of glittery Bippity Boppity Boutique princesses!”

Then, a spooky trip over to Haunted Mansion where the family was able to skip the standard line and go right to the stretching room of the attraction.

“Then we of course ventured over to the Haunted Mansion. There was a 50 minute wait to get on the ride but when they saw Briar, they immediately whisked her away into the secret “Servants Quarters” where we got to see the keys to all rooms and the bells that ring to call the servants up. Then they popped us right out into the stretching room. The cast members were waiting for us when the doors opened to present us with official Haunted Mansion Caretaker certificates and to walk us right on to the ride. It was so magical!”

All in all, Beard shared that though she was hesitant about buying the doll to begin with, it worked out pretty well and ended up making the family’s trip to Disney World even more magical.

A post shared by Creepy Chloe and Briar (@creepychloeandbriar)

Creepy Chole and Briar now have their own Instagram page with more than 1,000 followers and many other pictures for you to enjoy of their outings, including to Walt Disney World.

What do you think of this story that resulted in some awesome Disney World perks? Let us know in the comments!