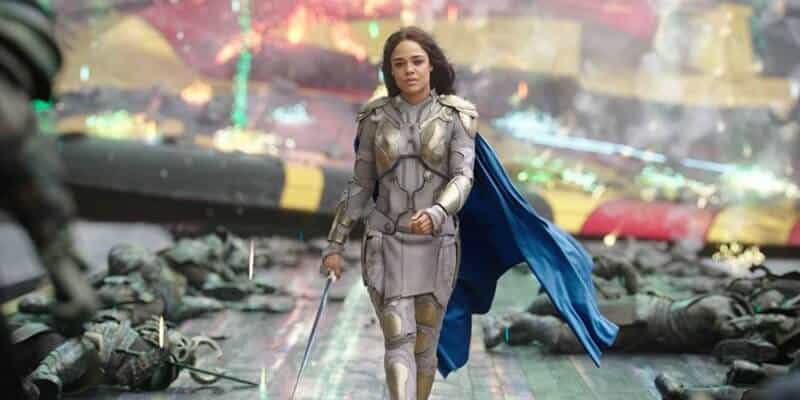 Marvel’s What If…? Season 1 was a standout series within the Marvel Cinematic Universe Phase Four roster. At first, a companion to the ever sprawling live-action MCU, What If…? became more important as the weeks progressed, delivering characters and Multiversal storylines that would allude to things to come.

Now, as What If…? Season 2 gains steam, the Marvel Animation panel at San Diego Comic-Con (SDCC) revealed a sneak peek of the animated series to presentation guests only, and one actress was notably missing from their cartoon counterpart.

One of the more prominent actresses in the latter MCU movies, Thompson’s Valkyrie landed with a bang in the third Thor franchise outing, Thor: Ragnarok (2017) from director Taika Waititi. The colorful romp through Asgard, Midgard (Earth), and more realms saw Thor (Chris Hemsworth), team up with Dr. Bruce Banner/Hulk (Mark Ruffalo), brother Loki (Tom Hiddleston), and Valkyrie to escape the Grandmaster’s (Jeff Goldblum) clutches and save their homeworld from Thor and Loki’s estranged sister, and fellow child of Odin (Anthony Hopkins), Hela, played by a mesmerizing Cate Blanchett.

Thompson’s elite, booze-swigging warrior returned this year in Waititi’s latest Thor effort, Thor: Love and Thunder (2022), alongside Hemsworth again, and Natalie Portman as Dr. Jane Foster/Mighty Thor. The King of New Asgard was once again swept up in a plot to kill all gods, orchestrated by Christian Bale’s Shakespearean take on Marvel Comics villain, Gorr the God Butcher.

But, it seems despite Thompson’s apparent tenure as King Valkyrie in Kevin Feige’s MCU, the actress will not be present for the next season of the animated series, What If…?.

Marvel’s What If…? debuted last August, and across nine episodes dissected the various facets of the Marvel Multiverse — long before Feige confirmed that Phases Four through Six were indeed labeled the Multiverse Saga — and showcased various characters in the anthology-style series, including the on-screen Marvel Universe’s first take on the Marvel Zombies arc.

However, in spite of the returning cast members, many names were absent, replaced by new voice actors for the series including Peter Parker/Spider-Man, Steve Rogers/Captain America, Natasha Romanoff/Black Widow, and Drax the Destroyer, who were played by Hudson Thames, Josh Keaton, Lake Bell, and Fred Tatasciore, respectively.

While the process behind the casting is murky at best with creator AC Bradley, director Bryan Andrews, and producer Brad Winderbaum suggesting the idea of scheduling conflicts, live-action Drax actor, Dave Bautista, stated he was never asked to take part in the project.

And next up to be replaced will be Thompson’s Valkyrie. Per The Direct:

In the exclusive SDCC trailer of What If…?, more MCU characters were revealed.

There is also a shot of Hela in the trailer. A Variant of Steve Rogers’ Captain America was also seen fighting against Thanos set in Avengers: Infinity War.

Other characters that were featured in the trailer are Bucky Barnes, Wenwu, Ying Li, Odin, The Great Protector, and Ant-Man.

Marvel themselves teased the introduction of new characters also. The studio said:

Marvel’s What If…? Season 2 does not yet have a release date but fans can expect it to land sometime in early 2023. Which other live-action actors will lend their vocal talents to the project is unknown, as are the ones that will be replaced for the animation outing.

The series played on the classic Marvel Comics arc which asks what would occur if a superhero’s story happened differently. All under the watchful eye of Uatu The Watcher, voiced by Jeffrey Wright, the nine-episode event concluded with a surprising crossover moment and the return of the villain, Ultron, played here by The Walking Dead‘s Ross Marquand. The series also included the voice of the late Chadwick Boseman in his final Marvel performance before passing away in 2020.

As the Multiverse Saga speeds up, and Marvel Phase Four closes in on its finale, What If…? could continue to play a pivotal role in the greater Avenger adventure.

Will you be tuning into Marvel’s What If…? Season 2 next year? Let us know in the comments down below!