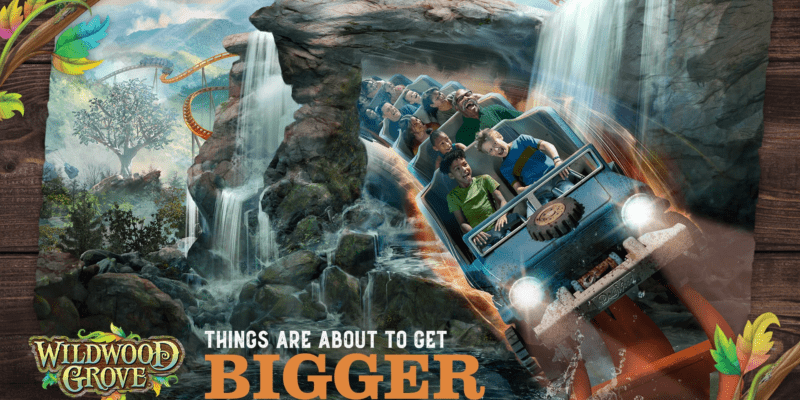 The “largest single attraction” has officially been announced to roar into one of the most popular theme parks in the country next year.

Amid the constant race for the most thrilling attractions, the best entertainment offerings, the most popular events, and even the best dining options for Guests, the number one theme park in the United States has just announced its next BIG project, and we couldn’t be more excited about it.

Dollywood has been teasing the Park’s next big project for over a week, sharing different content related to Wildwood Grove’s most storied and elusive inhabitant, Big Bear.

Dollywood officials teamed up with famed botanist and explorer Ned Oakley in attempt to get down to the root of what exactly is going inside Wildwood Grove. If you have any information that may help Ned out, call him at 865-868-0168.

Dollywood officials teamed up with famed botanist and explorer Ned Oakley in attempt to get down to the root of what exactly is going inside Wildwood Grove. If you have any information that may help Ned out, call him at 865-868-0168. #BearFiles pic.twitter.com/lPzi4RMZXX

This massive ride is described by Dollywood’s website as follows:

Things Are About To Get BIG

It’s almost time to venture into the Smokies for an unforgettable adventure aboard Dollywood’s largest attraction. Ned Oakley, Wildwood Grove’s resident wilderness explorer, knows a thing or two about this hidden land and is setting up the Adventure Outpost Base Camp, located just a stone’s throw away from the Grove’s Hidden Hollow. Here, you’ll join Ned in his specially-outfitted, four-wheel drive SUVs for the ride of your life in search of the Grove’s most storied and elusive inhabitant, Big Bear.

Big Bear Mountain will be the longest coaster at Dollywood, taking guests of all ages on an unforgettable family-friendly expedition in search of the Big Bear. Circling Wildwood Grove for nearly two minutes on 3,990 ft. of track, this gigantic coaster is a first of its kind at Dollywood with onboard audio, including music and announcements from Ned Oakley himself.

This massive new attraction will reach a top speed of 48 miles per hour thanks to a multi-launch system, with the highest track elevation reaching 66 feet, taking 20 daring Guests on a 104-second adventure with twists, turns, and even going through a waterfall.

Dollywood Parks & Resorts (@Dollywood) shared a POV video from this thrilling new coaster’s render, and the experience looks genuinely breathtaking. You can see the video below or click here to watch it.

Prepare for things to get BIG by watching our exclusive first look at ride animation.

Prepare for things to get BIG by watching our exclusive first look at ride animation. pic.twitter.com/nKzsNX5NXp

In Tennessee, one of the best theme parks that anyone can visit is Dollywood. Not only is the Park owned by musical sensation Dolly Parton, but it is also doing a lot for the employees who work there. With over 45 attractions for the entire family, fun activities, special events, and exciting entertainment offerings, it’s no wonder why Dollywood is rated as the number 1 theme park in the United States by Tripadvisor.

Dollywood is currently holding the last weeks of the Park’s Smoky Mountain Summer Celebration, an event packed with fun for the whole family happening now and through August 7.

The official Dollywood website describes the event as follows:

Are you excited about Big Bear Mountain opening next year at Dollywood? Let us know in the comments below!