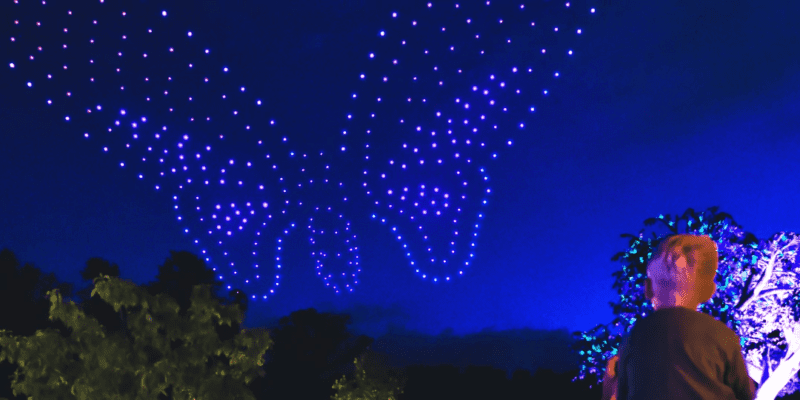 With theme parks constantly competing for the fastest, tallest, and steepest rides, the best entertainment offerings, the most popular events, and even the best dining options, it is essential to keep innovating and improving to stay ahead of the curve. And one of the most popular theme parks in the country is doing an impressive job, leaving its competitors behind with an amazing nighttime spectacular.

Sam Carter (@Cartarsauce) recently shared a video on Twitter that shows Dollywood has taken a massive step ahead of its national competitors, being one of the first, if not the first theme park in the country to use drones on their nighttime show, in addition, of course, to the traditional fireworks.

The original video was posted by Adventure is Out There on their YouTube channel. You can watch the whole show by clicking here and learn more about this year’s Smoky Mountain Summer Celebration at Dollywood on their video, as they visited the Park on the event’s opening day, by clicking here.

What the heck?! @Dollywood has a drone show?? Take that Harmonious. Drones might have been the big wow factor that it is missing for EPCOT’s new show

What the heck?! @Dollywood has a drone show?? Take that Harmonious. Drones might have been the big wow factor that it is missing for EPCOT's new show

Full footage "Adventure is Out There" youtube channel. Give them a subscribe, thanks for capturing it. https://t.co/327EvJKioQ pic.twitter.com/ZqEL6S1LGl

The official Dollywood website describes this nighttime spectacular as follows:

Family-favorite Sweet Summer Nights drone & fireworks show is back – bigger, brighter and more beautiful than ever! This shimmering spectacular is made even sweeter this year with larger drones and new illuminated scenes. Experience summer’s best moments as hundreds of drones dance across the night sky to tell a unique Dollywood story through 3D animations and a symphony of light. End your summer day with a spectacular night!

The show takes place at 9:40 pm daily, weather permitting, after the dance parties that are also part of Dollywood’s summer event at 8:45 pm and 9:15 pm. The site reminds Guests that drones are visible only in the Wildwood Grove area, so if you want to enjoy the illuminated sky at the end of your next visit, make sure to arrive a little earlier to secure the perfect spot.

We recently reported on a special Disney+ event that also used drones to illuminate the Los Angeles skyline, promoting Bundletown, a new bundle deal by Disney, which offers Guests the chance to subscribe to Disney+, ESPN+, and HULU. Videos of the event shared by several influencers ignited a discussion commenting it is time Disneyland made use of this technology to improve the Park’s nighttime spectaculars, especially since Disneyland Paris has already implemented the use of drones in Disney D-Light. This performance is part of the Park’s 30th Anniversary nighttime spectacular.

Fortunately, news recently surfaced of Disneyland experimenting with bringing drones into the Park’s nighttime shows, which would open a whole world of possibilities for the Park, as well as for Walt Disney World.

While Disneyland has not released official word on their timeline with this project, Dollywood will continue to delight Guests with this beautiful show during the Park’s Smoky Mountain Summer Celebration happening now and through August 7.

In Tennessee, one of the best theme parks that anyone can visit is Dollywood. Not only is the Park owned by musical sensation Dolly Parton, but it is also doing a lot for the employees who work there.

The official website for Dollywood describes the Park as follows:

Have you ever visited Dollywood? Let us know in the comments!