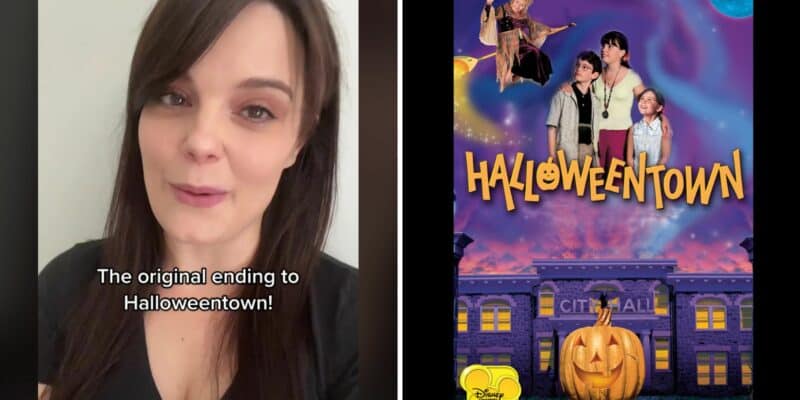 Halloweentown (1998) is a Disney Channel Original Movie that stars award-winning actresses Kimberly J. Brown (Marnie Cromwell) and Debbie Reyolds (Aggie Cromwell). Like Hocus Pocus (1993) or Nightmare Before Christmas (1993), it remains a seasonal staple for many Disney families more than 20 years after its release.

On her 13th birthday, Marnie learns she’s a witch, discovers a secret portal, and is transported to Halloweentown — a magical place where ghosts and ghouls, witches and werewolves live apart from the human world. But she soon finds herself battling wicked warlocks, evil curses, and endless surprises.

Disney released a few Halloweentown sequels over the years, including Halloweentown II: Kalabar’s Revenge (2001), Halloweentown High (2004), and Return to Halloweentown (2006). Kimberly J. Brown reprised her role as Marnie in three of the four total films.

In celebration of the series, its original filming location of St. Helens, Oregon transforms its Riverfront District into the Spirit of Halloweentown, an annual six-week celebration that features film scenes like the infamous pumpkin plaza, as well as spooky parades, a haunted house, and several other festivities.

Kimberly J. Brown has even attended the festival in the past to meet with fans, who best associate her with the Disney Channel role and have followed her journey ever since. Through her festival appearances and her social media activity, more than a million fans have kept up with the celebrity.

She’s an active TikTok user, often participating in trends that at times include Halloweentown co-star Daniel Kount, who plays villain Kal in Halloweentown II: Kalabar’s Revenge. The pair recently announced their engagement on the platform, along with a timeline of their relationship as seen in the video below.

Have i introduced you to my fiancée? #isaidyes 💍 ❤️ @danielkountz

Have i introduced you to my fiancée? #isaidyes 💍 ❤️ @danielkountz

♬ Come and Get Your Love – Redbone

Commenters agreed that the announcement “made an entire generation’s day,” with more than seven thousand congratulatory replies.

In her most recent post, Kimberly J. Brown shared a piece of movie trivia that might be considered little known, even to the most loyal of fans.

#stitch with @Kristen Marie Milroy yes! The original ending to #Halloweentown was different 😏

The TikTok video confirms a fan’s recent research into an alternate ending of the original movie.

There was initially a different ending to the first Halloweentown movie where instead of Marnie putting the talisman in the middle of the jack-o-lantern to save Aggie and Gwen, she had to walk deep into this dark, magical forest and put the talisman there. As she did, with each step she took she grew exponentially older. We got into the middle of the pre-makeup process where they make a cement mold of my face so they could make special, makeup masks for aging Marnie, but in the middle of that process, they rewrote the ending.

Kimberly shared that after more than two decades, the cement mold of her head is still in her possession, even teasing that she’d reveal it to fans in a future video.

All 4 Halloweentown films are available to stream on Disney+. As for the future of the franchise, fans have asked if they’d ever consider filming yet another series movie.

“We’re totally down if Disney is!” Kimberly replied.

Rumors have swirled of a potential reboot, but none have been officially confirmed by Disney.

Would you like to see Disney make another Halloweentown film? Tell us in the comments!