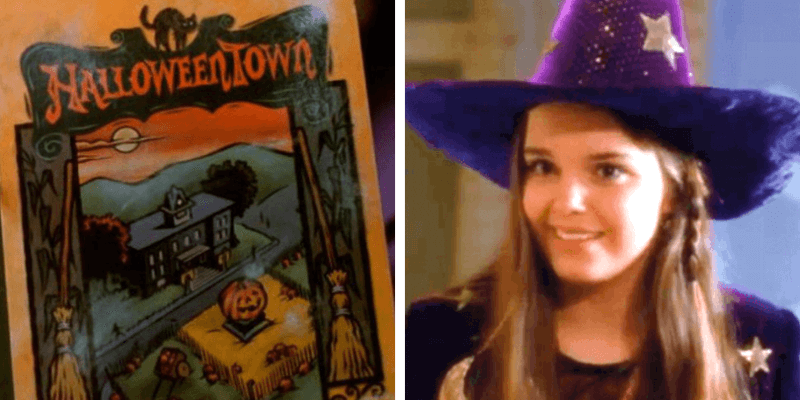 ‘Tis the season to be spooky! Yes, it’s the Halloween season and one of the most iconic Disney movies, or series of movies to be exact, are the Halloweentown films from The Disney Channel! It’s been over two decades since the first Halloweentown movie debuted and it still holds a special place in Kimberly J. Brown’s heart. Brown portrayed Marnie Piper, the series’ main character, so it’s no surprise that Halloween is still one of her favorite times of the year in real life.

One of the most often asked questions for the actress is if she got to keep anything from the Halloweentown set and if so, what did she keep. Well, she’s shared on social media and interviews that she indeed did get to keep some of the props from the movies! These are the items from set that she has kept through all these years — along with the memories she made on set. You can head over to her Tik Tok account to hear her talk about these items!

I always get asked what props I kept from #Halloweentown….I think I said it right…#tbt

Brown says that another one of the most-asked questions she gets is about the Halloweentown book, so she shared it with fans via YouTube. The book itself is not the actual one that was used for filming, but after they wrapped the shoot, producers gifted her with a copy of the book. Below is Marnie Piper herself reading the Halloweentown story to us.

Props and memories aren’t the only things that Kimberly J. Brown took away from the Halloweentown set. After spending so many years filming these movies with the cast, they’ve really built-up friendships. Kimberly and Judith Hoag, who played Marnie Piper’s mom, Gwen Cromwell Piper, have remained close and the two have even done vlogs for their respective YouTube Channels together.

Another happy ending to Kimberly’s spooky movie life is that 17 years after filming Halloweentown II: Kalabar’s Revenge, she took away more than just a friendship. Daniel Kountz, who played Marnie Piper’s evil counterpart, Kal, is now her boyfriend. Talk about an interesting turn of events! On Halloween 2020, you have the opportunity to meet all three — Kimberly, Daniel, and Judith — during a live Q&A Panel for Galaxy Con Live to ask all the juicy questions.

It looks likes Halloweentown really sparked Kimberly’s creative side. She knows that there’s a large fan base for Halloweentown, so she co-founded an Etsy shop Craftily Creative that sells products inspired by the movies. Many items feature one of the most famous Halloweentown quotes, “Being normal is vastly overrated.” But, does anyone remember these “headphones” from Halloweentown II?

? NEW PRODUCT DROP!? We are so excited to finally release these in the shop! Over the years, the blue and red headphones from #halloweentown2 have been one of the most requested characters so we made them into silicone keychains! You can get one by itself or both together as a set. Link in bio to see their listings?? Stayed tuned for another new product drop next week! ? . . . #etsyshopsofinstagram #halloweenkeychain #halloweentown #halloween

Be sure to follow along with her on Instagram because she’s sharing a lot of Halloweentown stories for her Throwback Thursday’s. You can catch all the Halloweentown movies and the rest of the Halloween Collection on Disney+! Maybe one day, you can even visit the real Halloweentown, St. Helens, Oregon and other Disney inspired Halloween location. For more Halloween movies check out this line-up that Freeform is releasing.

Do you love Halloweentown?

Comments Off on Kimberly J. Brown Took More Than Props From ‘Halloweentown’