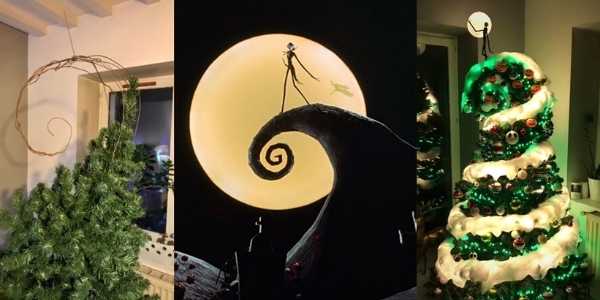 One of the most iconic scenes in The Nightmare Before Christmas is when Jack Skellington walks up the twisted hillside singing. Sally, who is in love with Jack, watches from a distance as Jack slowly climbs the spiral hill with the full moon illuminating behind him and his ghost pup, Zero. It’s a perfect scene to replicate. So, why not try to do so on a Christmas tree? Well, this fan attempted to transform a tree in The Nightmare Before Christmas fashion and did so in the most stunning way.

RELATED: Entertain Guests With the ‘Nightmare Before Christmas’ Cookbook

@lor4n.n has a video that is going viral on social media. The first video currently has over 3.6 million views and 665k likes. The TikTok user posts “L’étrange sapin de Mr Jack” which translated out of French is “Mr. Jack’s strange tree.” Strange indeed, but wow… check out the amazing transformation in the video below:

@lor4n.n shares in another video how to make that stunning snow effect that wraps around the tree:

We’re curious why this tree transformation has yet to come to Disney. It would be a perfect addition to the Disney Springs Christmas Tree Trail!

Anyone else going to attempt The Nightmare Before Christmas tree this year? Let us know in the comments!