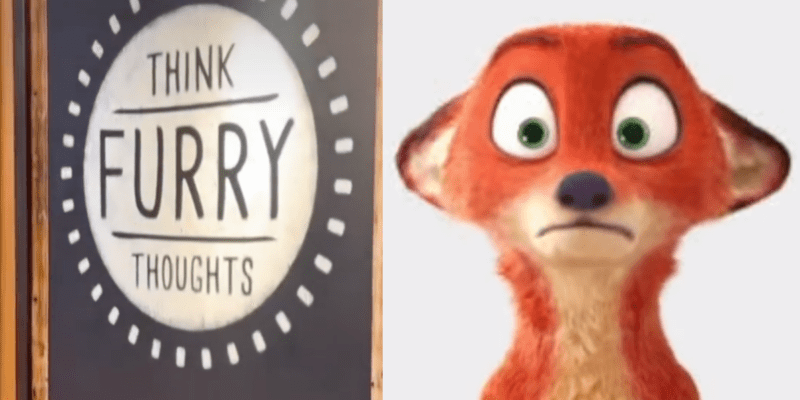 A Walt Disney World Resort Guest did a double take when shopping for souvenirs earlier this month.

TikTok user @chubbyelvis shared a video of a sign at a Disney Springs shop, the Marketplace Co-Op, that reads, “Think Furry Thoughts:”

“Disney is getting very inclusive these days,” the Guest wrote.

Next to that sign is another for DisneyTails, Disney’s pet products line selling animal clothes, accessories, toys, and more. Though the “furry” in this sign most certainly refers to furry pets, fans quickly pointed out the double meaning in the sign.

@laurynelisabethcreates used to work at this Walt Disney World Resort shop and said this Guest wasn’t the first to notice the sign:

“I would stand at the tails register for hours watching guests take pictures of those signs…hated tails so much.”

A “furry” is someone interested in anthropomorphized animals. Many furries create detailed, custom “fursuits” and costume pieces to wear at conventions. Though there is a misconception that furries are inherently sexual, most furries only participate in the artistic and social aspects of the lifestyle.

Furries received increased attention after Walt Disney Animation Studios’ Zootopia (2016). Due to the anthropomorphic animals in the film, many of the characters were mocked online for looking like fursuits. Though furries have only been in the spotlight on social media for the last few years, furry conventions have occurred since 1989.

Jessica, a former Walt Disney World Resort entertainment Cast Member, shared the TikTok and said that many male Guests would mention being furries to characters at the Disney Parks. From @TremaineTok:

“The amount of Dads that came up to me and told me they were furries while taking a picture with me… it’s more than one; it’s a lot,” Jessica says in the video.

In the comments, Jessica pointed out that she had nothing against furries, but whenever men spoke to her about it in character, they were trying to be creepy or flirtatious.

To be perfectly fair tho, I became a furry bc I’ve always wanted to play one of the characters at Disney 😅😳

Of course, this sign is about pets and not furries. If you notice the sign on your Walt Disney World Resort vacation, we advise against harassing Cast Members about the double meaning.

Have you noticed the “Think Furry Thoughts” sign at Disney Springs?