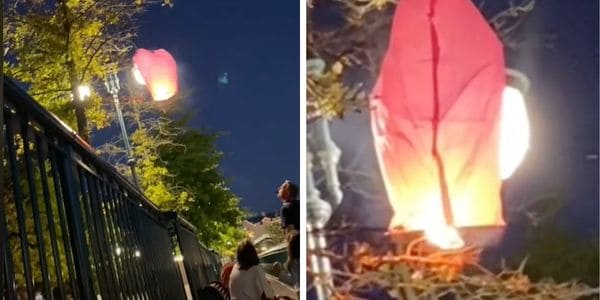 Recently, we have seen our fair share of Disneyland and Walt Disney World Guests breaking the rules, arguing, and even engaging in physical altercations. On the international side of things, at Disneyland Paris, we have seen Guests tear down water hoses, jump over fences, and trespass into off-limits areas.

Rule-breaking is bound to happen, and sometimes we can do so without even realizing it. However, in a new shocking and confusing video that was shared on social media, one Disneyland Paris Guest does the unthinkable and accidentally starts a fire at the Resort.

A video was shared on TikTok recently showing what appears to be a Disneyland Paris Guest letting go of a lit lantern. The lantern quickly hits one of the trees at the Resort and seemingly watched it on fire:

Related: Disney World Bus Breaks Down In Middle of Highway With Guests On Board

The text on the screen reads, “The visitor sets fire to Disneyland Paris.” In the comment section, several users and Guests shared their thoughts on the situation. One user said, “It should be forbidden to sell these lanterns. People don’t have the judgment to know where to fly it”

Another said, “And that’s why we normally think before doing it”. Another asked why these aren’t banned “Why not ban this especially given the fires that are already ravaging our forests, our homes?”

As of now, we are unsure where exactly this took place or how Disney or the Guests dealt with the fire. We aren’t entirely sure if Disney had a specific rule on this action, but this is certainly not encouraged inside the Disneyland Paris or Walt Disney Studios Parks as it is a safety hazard not just for Guests but for the Parks themselves.

Have you ever seen something like this happen at Disney?