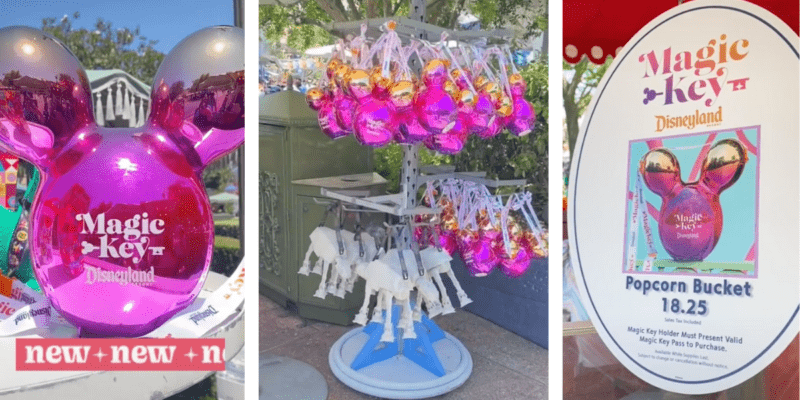 Disneyland Magic Keys – the new Annual Pass program for Disneyland Park and Disney California Adventure – sold out in May, leaving hopeful Disney Parks fans wondering when they’d be able to purchase a new pass. Amid an ongoing multimillion-dollar federal lawsuit against Disneyland Resort due to alleged false advertising, current Magic Key holders were left unsure if they’d be able to renew their Magic Keys.

Disneyland Resort announced on Tuesday that it would allow any current Magic Key holder to renew into one of four more expensive Magic Key tiers – Inspire, Believe, Enchant, and Imagine – after it eliminated the Dream Key, the cause of the ongoing lawsuit. The most significant change is that all Magic Keys now come with blackout dates.

Kel (@themeparkmom) went to Disneyland Park after renewals were announced and noticed a new Magic Key perk at the Disney Park: a popcorn bucket. She shared a video of the iridescent Mickey Balloon-shaped popcorn bucket on TikTok:

According to Kel, the popcorn buckets are $18.25 and aren’t refillable – so there’s no discount or incentive to use the bucket again after purchasing. Guests must show proof that they own a Magic Key to buy the bucket.

“I wonder long Disney has actually had these sitting around, just waiting to see if Keys were going to be officially renewed,” Kel says in the video.

Multiple comments said they liked the bucket but were turned off when they found out it wasn’t refillable. @samshoediva8 wrote:

I feel like this is a sorry apology bucket. Like sorry we basically told you pass holders that you suck so here you go.

Depending on the Magic Key tier, it can take between three and nine visits to “break-even” on your purchase – for the Pass to equal the cost of single-day tickets. One Disneyland Resort fan said, for this reason, they don’t understand why so many Disneyland fans complain about the Magic Key program:

I will never understand all the hemming and hawing. If the pass is paying for itself with 8 days of use, why is everyone so angry? Just buy tickets and pay full price for everything if you’re that salty about it. Nobody is twisting your arm to buy a pass, but for some of us it just makes good sense!

Will you buy the Magic Key popcorn bucket?