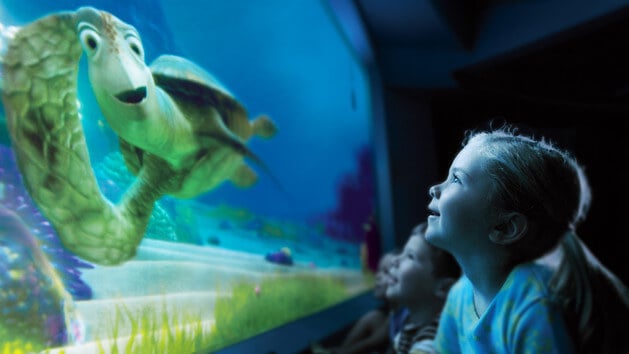 Meeting and interacting with your favorite Disney characters while visiting the Happiest Place on Earth is one of the most magical experiences Guests can have, but they can sometimes get a little out of hand.

Former Cast Member Tommy Arciniega (@tawmbien) recently shared an uncomfortable experience during a performance at Disneyland after a Guest made a highly inappropriate joke about domestic abuse.

Tommy’s video posted on TikTok was initially meant to address the question, “has an audience member ever been kicked out for an inappropriate question?” Tommy responded that they never kicked anyone out and never saw it happen but that they received a fair share of inappropriate questions and answers during their time as a character performer in Turtle Talk With Crush.

Tommy then told the story of a time when Crush was talking to an older kid after bringing out a football helmet, asking the kid what he was supposed to do with the helmet. The kid responded, “you beat your wife with it,” causing several gasps from the audience and a tense silence that, according to Tommy, felt like an entire minute.

Tommy commented that they tried to think of a way to get out of the situation and that, in addition to the human “fight or flight” response, they felt pressure for being a front-facing character who is “notoriously cool and composed at all times.” Tommy then commented that they dropped the idea of trying to come up with a witty or clever response and decided to simply talk to the Guest.

Oh, dude, I’m sorry your joke didn’t land man. You know, there are sometimes I swim out here and talk to you human dudes, and I worry if I’m being funny enough or entertaining enough, man. I talk to my friend the jelly man and he gives me some great advice about swim-up comedy dude. You got a lot of power when you got people listening to you man, you gotta choose your words wisely and know your audience bro. And even though me and some of the other human dudes here might not have understood your joke, I still think you should try to keep being funny man.

Tommy added that the Guest got Crush’s iconic “you so totally rock,” and they ended the situation in a nice simple moment.

Replying to @icomefrommexico never seen it happen. still got inappropriate questions & responses tho..

Replying to @icomefrommexico never seen it happen. still got inappropriate questions & responses tho..

While this Guest created a very uncomfortable moment for Guests and Cast Members alike, the way Tommy handled the situation without escalating the highly inappropriate comment made by this Guest is praiseworthy.

More on Turtle Talk With Crush

If you have never experienced Turtle Talk With Crush before, the official description reads:

This show is improvised, providing a different experience for Guests looking to have a totally awesome talk with Crush on each show, not to mention a hilarious experience for Guests of all ages. Next time you’re visiting Disney California Adventure, make sure to stop by the Disney Animation Building to enjoy a Turtle Talk with Crush or other fun activities like the Animation Academy and the Sorcerer’s Workshop.