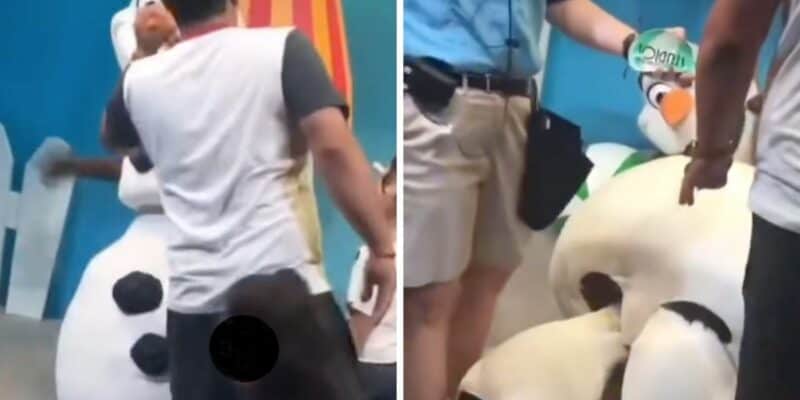 Unfortunately, during one meet and greet opportunity, a Guest pushed Olaf, resulting in the Frozen character getting knocked backwards.

Olaf is currently meeting Guests at Disney’s Hollywood Studios. He is best known as the friendly snowman from the Frozen franchise, where he is voiced by Josh Gad. Walt Disney World describes this character meet and greet as:

Come see Arendelle’s coolest resident as he steps into the Celebrity Spotlight to take photos with friends old and new.

During a meet and greet at Disney’s Hollywood Studios, one Disney World Guest shoved his hand in Olaf’s face and pushes him over, resulting in the character tumbling backwards.

In a video posted to TikTok, which you can see below or by clicking here, a Disney adult can be seen putting his finger in Olaf’s face before shoving him slightly. Olaf then tumbles backwards and is stuck and cannot get up. This is when the Disney Character Attendant rushes over and asks everyone to leave.

It is unclear if this Guest purposely pushed Olaf over or if this was an accident. It is also unclear as to what lead to this incident.

Have you ever met Olaf at Disney’s Hollywood Studios? Let us know in the comments below.