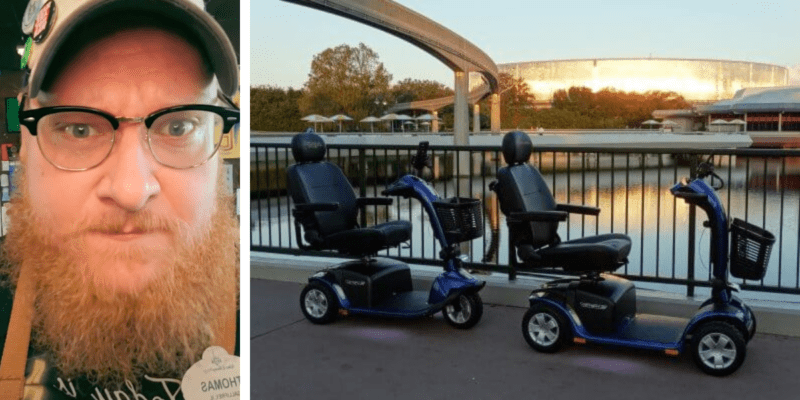 Scooters and Electric Conveyance Vehicles (ECVs) are available for rent through Walt Disney World Resort and various third-party services. An alternative to wheelchairs, they help Guests who struggle with walking effectively move through the Disney Parks.

Though some attractions can hold ECVs, most require Guests to transfer into a ride vehicle if they’re able. If Guests can walk a short distance, Disney Cast Members prefer that Guests park their scooters before entering short queues to save space for wheelchairs and medical strollers.

Thomas (@dappermanatee) has gained a following on TikTok for telling stories about his time as Walt Disney World Resort Cast Member at The Seas with Nemo & Friends in EPCOT. This week, he recounted how he handled an unfriendly Guest on a mobility scooter:

Thomas calls himself “Mitch” throughout the story, referring to a persona he used on days when he felt like “a burned-out Cast Member that was done with the Parks and people. Disney would be great without all the Guests,” he joked.

At the time, Thomas was tasking, a position in attractions at Walt Disney World Resort which means Cast Members aren’t assigned to any specific role and can help where they’re needed. He was standing outside greeting Guests when a woman using a mobility scooter ran over his foot. The Guest reportedly didn’t apologize and asked Thomas if he was the valet.

“No, I’m just greeting people. Feel free to park your scooter in strolling parking if you’d like,” Thomas replied, noting that his foot was “throbbing.” He referred to Disney rental scooters as “big, gray trucks.”

“They say, ‘Nah, I’m good. I’m going to leave it right here,’” Thomas explained. “And they do my favorite key wiggle. You see, some people had the idea that if they wiggle their key at you, they got you. What they don’t know is Mitch; when he feels petty enough, he gains super strength.”

After the Guest abandoned her mobility scooter, Thomas put it in neutral and started manually pushing it to stroller parking… just not the stroller parking by The Seas with Nemo & Friends. He joked that he parked the ECV “valet style in a parking garage three blocks away.”

“Now, you see, when you leave the Park, you still gotta go over towards Mission: Space. And wouldn’t you know it? The scooter told me that’s where it wanted to go, too,” Thomas said. “It was its destiny. So I parked it so nicely in stroller parking right over at Mission: Space.”

Mission: Space is on the other side of Spaceship Earth, about ten minutes walking distance from The Seas. But before anyone argued with Thomas, he issued the following warning:

“Before you go with, ‘Maybe she needed it.’ Most attractions have a backup wheelchair, so if you really need it… Or, park your scooter and don’t run over Cast Members’ feet.”