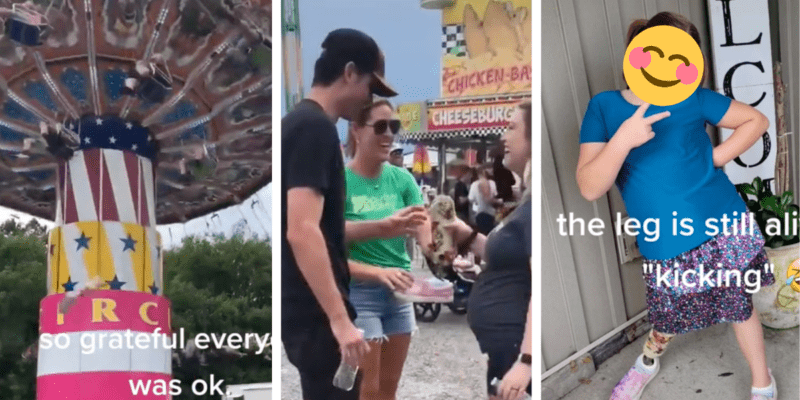 Though carnival rides are constantly on the move, they frequently travel with well-trained, experienced employees that know how to make the rides as safe as possible. They’re regularly inspected and checked at every location to ensure Guest safety!

When families can’t travel for a Theme Park vacation like Walt Disney World Resort or Universal Studios, carnivals and local fairs bring fun to their door. One of the most common carnival rides is the spinning swings – also available at many Six Flags and even Disney California Adventure as the Silly Symphony Swings.

Tatum Renee Chirpich recently took her family to the carnival and had an unexpected experience. Though this carnival accident wasn’t the fault of the ride’s owner or operator, it put many Guests at risk. Chirpich was filming her daughter Kennedy on the spinning swings when the little girl’s prosthetic leg malfunctioned. She shared the video on TikTok:

my daughter’s leg malfunctioned at the fair and fell off from the swings 😳. no one was hurt, it was an accident. #countyfair #prosthetics #ohno #thatwasclose #nourisheveryyou #findyourgrace #funny #fyp #amputeeproblems

In the video, Chirpich screams, “Look out!” as the heavy prosthetic leg soars through the air at top speed. Thankfully, it just missed other Guests, and Chirpich was able to recover Kennedy’s medical equipment.

“Her leg is extremely heavy and could have seriously hurt someone. We were incredibly lucky,” Chirpich wrote in a comment on the video.

Though Kennedy’s prosthetic leg took quite the tumble, it was not damaged in the accident.

“Amazingly it doesn’t have even a scratch on it. She is getting a new one made though because it’s time,” Chirpich said in another video caption. “She gets a new one once a year.”

Chirpich also shared a video of Kennedy smiling and wearing her prosthetic leg after the accident:

Replying to @misslexilouwho definitely still usable. amazingly it doesn’t have even a scratch on it. she is getting a new one made though because it’s time. she gets a new one once a year.

Some comments accused the accident of being planned or staged, but Chirpich remains adamant that Kennedy would never put anyone at risk like that.

Two of Chirpich’s daughters, including Kennedy, were born with a rare condition called Fibular Hemimelia. This meant that Kennedy was born without the fibula in her right leg and many of the bones in her lower right leg, including her ankle. Her right leg was also considerably shorter than her left leg and had to be amputated.

Kennedy’s nearly two-year-old sister will need a bilateral amputation and is also affected in one of her hands. Chirpich uses her TikTok account to raise awareness about the condition:

Replying to @jaanneellleeee this was a much easier way to explain lol.

We’re happy that Kennedy and the other carnival Guests are safe after the accident.