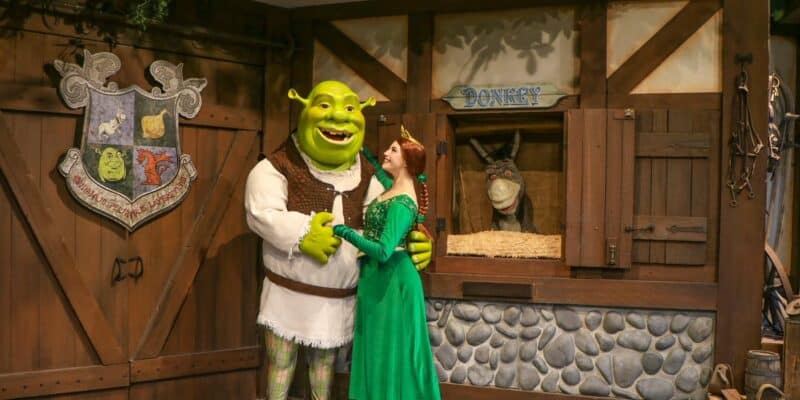 Guests visiting the Universal Studios Resort in Orlando, Florida will surely notice that representation of the Shrek franchise is quite limited compared to what it once was.

Shrek 4-D opened two years after the DreamWorks film Shrek (2001) due to its worldwide success and could also be found in Universal Studios Hollywood, Singapore, and Japan, with the attraction now only remaining at Universal Studios Japan and Singapore.

While nothing has been confirmed regarding Shrek 4-D’s replacement, Universal has hinted many times at a Minions makeover. Earlier this year, construction walls were spotted featuring Minions all around them. While nothing has been officially announced by the team at Universal on what will replace the Shrek 4-D attraction, Universal has given many hints that seem to indicate a Minions retheme is coming. Universal Orlando already has a Minion-themed ride with Despicable Me Minion Mayhem, a motion simulator-based attraction. While sad, Guests can still watch the entire Shrek series which stars Mike Myers, Eddie Murphy, and Cameron Diaz

The Resort also use to feature a meet and greet at the Park which has been closed since June 7 so it could relocate to a new area. Now, it was just confirmed by digital journalist Ashley Carter (@AshleyLCarter1) that the Shrek meet and greet has finally returned to the Universal Studios Resort.

JUST IN: The popular meet and greet with Shrek and Donkey is back in a new location, Universal Orlando has announced. Starting today, guests can meet the characters in the KidZone area of Universal Studios Florida.

JUST IN: The popular meet and greet with Shrek and Donkey is back in a new location, Universal Orlando has announced. Starting today, guests can meet the characters in the KidZone area of Universal Studios Florida. pic.twitter.com/qzkJgOsr4Q

This made sense as Shrek 4-D closed earlier this year as well which the meet and greet resided near. While Shrek 4-D was far from anything groundbreaking or advanced, the attraction gained a cult following and status, much like the film franchise itself.

Will you be meeting Shrek anytime soon at Universal?

Comments Off on Universal Studios Finally Brings Back ‘Shrek’ Attraction