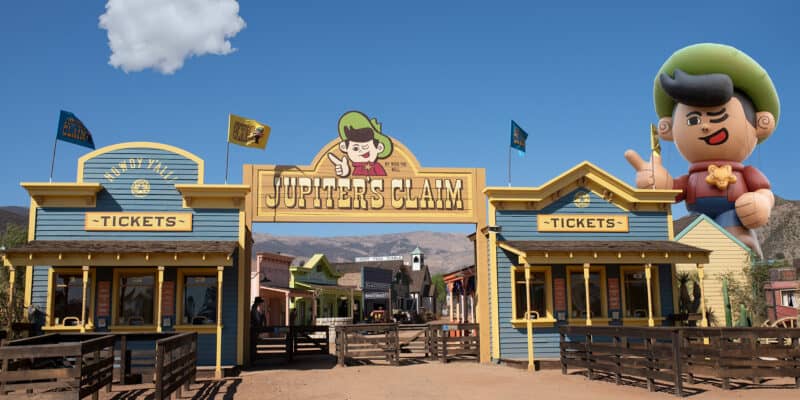 It is no secret that one of the things that make the original Universal Studios Park so unique is its World-Famous Studio Tour. The official site describes it as follows:

Go behind the scenes of a real working movie studio!

The Studio Tour has been a fan favorite for well over 50 years, and with a massive new addition recently announced, Guests are thrilled to hop on the iconic tram and visit a new and exciting location.

Excited fans were quick to react to the news, saying that Jordan deserves this recognition and that they are thrilled to visit the set and watch this highly anticipated horror film, which will premiere on July 22 as well.

This event marks the first time a Studio Tour attraction has opened day and date with a movie release. Jupiter’s Claim will be staged within Universal Studios’ backlot alongside a host of other iconic movie sets that include Steven Spielberg’s War of the Worlds (2005), the infamous Psycho house from Alfred Hitchcock’s Psycho (1960), and Courthouse Square from Robert Zemeckis’ Back to the Future (1985).

The impressive and elaborate Jupiter’s Claim set was created by Production Designer Ruth DeJong, then carefully disassembled post-production and transported to Universal Studios Hollywood, where it was meticulously reconstructed on site, complete with original props and details from the film.

Jordan Peele, alongside producing partner Ian Cooper and Monkeypaw Productions, is thrilled to bring the film’s fictional theme park to Universal Studios Hollywood as a permanent Studio Tour attraction.  Concepting the integration of the set to the Studio Tour began early in the production in partnership with the filmmakers, working collaboratively with Universal Creative at Universal Studios Hollywood to ensure authenticity and accuracy.

“I remember visiting Universal Studios when I was 12 years old and being mesmerized. That experience reinforced my passion and drive to someday join in on the meta-magic of ‘backlot life.’ Since then, I’ve been fortunate enough to direct three movies for Universal,” said Jordan Peele in a Universal Studios Hollywood press release. “It is a privilege to honor these collaborations with my studio partners, crew members and cast, and to be able to share Jupiter’s Claim with fans.”

After random objects falling from the sky result in the death of their father, ranch-owning siblings OJ and Emerald Haywood attempt to capture video evidence of an unidentified flying object with the help of tech salesman Angel Torres and documentarian Antlers Holst.

The Studio Tour is renowned for taking Guests behind the scenes of an authentic movie and television production studio. With the exciting addition of the Jupiter’s Claim set from NOPE and the progressive rollout of electric Studio Tour trams, a summer of fun is just beginning at Universal Studios Hollywood.

On July 22, fans can experience NOPE on its opening weekend at Universal CityWalk’s state-of-the-art Universal Cinema, an AMC® Theater, before heading to Universal Studios Hollywood to see the original set from the film. After all, this is the place to see movies, where movies are made.

Are you excited to see this new addition to the Universal Studio Tour? Let us know in the comments below!

Comments Off on Universal Announces Massive Change to Fan-Favorite Attraction