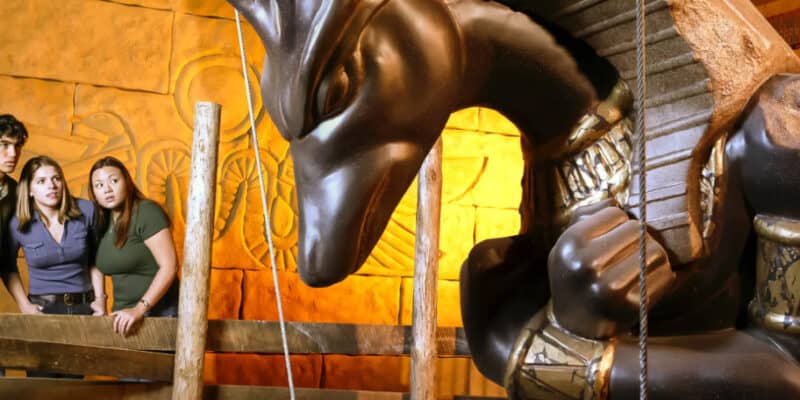 One of Universal Orlando’s most popular rides may be returning a lot sooner than we think.

Revenge of the Mummy at Universal Studios Florida has been closed since January undergoing an extended closure. The attraction isn’t set to open until “late summer 2022,” according to Universal Orlando.

Universal Orlando reportedly began hiring Team Members for the attraction a few months ago and there have been rumors that the attraction could open to the public by the July 4th weekend, which would be far ahead of schedule compared to the expected August or early September date. Obviously, this did not happen as July 4th came and went with no word on the attraction.

However, a recent video captured by @unleashthecurse on Twitter showed that the attraction appears to be nearing its reopening. You can check it out below:

Revenge of the Mummy now has additional barricades set up, the locker room has some more lights on inside, and there are some characters meeting outside the entrance for the first time in a while…

Revenge of the Mummy now has additional barricades set up, the locker room has some more lights on inside, and there are some characters meeting outside the entrance for the first time in a while… 🤔 pic.twitter.com/a4IIyS5nH5

As you can see, there are now barricades set outside the ride’s entrance as well as characters walking around, something that has been missing for a while. There are also some lights on in the locker room area. Now, none of this is solid confirmation of a reopening date, but it does make us hopeful that we could see the ride reopen very soon.

Do you miss Revenge of the Mummy: The Ride?